As millions come to grips with the claimed agreements emerging from the Copenhagen Conference on Climate Change, it's impossible to resist the suspicion that politics can provide no solution to the serious environmental and ecological problems facing the earth.
Despite the absurdity of shout shows which daily disparage global warming, it is a fact that sea ice in the Arctic is melting, as are Antarctica and Greenland ice sheets.  This, coupled with melting glacial  ice in places like the Himalayas, spells climate change that threatens disaster for millions of people in the region of Bangladesh, and the Indian state of West Bengal.

It means both flooding and drought, increased heat, more disease and the destruction of human habitat.

Politicians, speaking for their nation states, pledge a lessening of carbon emissions by 2020, thereby ignoring the view of many scientists that if all such emissions ceased today, the deleterious effects would be devastating.

Eleven years from now, very few of the politicians making today's agreement will be in office. As Bush showed, it's relatively easy to abrogate a treaty obligation -- just ignore it.

Politicians are overwhelmingly the hirelings of the corporate class; they often do their bidding, as it is usually them -- and only them -- who can afford them!

When the Tuvalu Islands, low lying atolls in the South west Pacific, go underwater; when rivers burst their banks  in Bangladesh; when drought threatens millions in India and Africa, will we look back at Copenhagen and think, 'well done?'

Mumia on the Massacre in Marikina


Dying For A Raise

The Massacre in Marikina, South Africa, of striking mine workers has caused dismay and disbelief the world over.

Thirty four miners were slaughtered, and 78 others wounded by a hail of police gunfire.

How could this be in today’s South Africa?

How could this happen in a post- apartheid South Africa?

How could this happen in a predominantly Black government, led by the African National Congress (ANC)?

The spectacle tells the tale: black police, clad in blue overall uniforms, were called by the Lonmin Mine Co. officials, to stand against Black miners holding a wildcat strike demanding better wages and improved working conditions.

When they refused police orders to disperse from a nearby hill, the cops attacked them with automatic weapons fire.

Who do you think they worked for: their people – or the mine operators and owners?

Whom did they serve and protect?

And striking miners are dying for a pittance, while owners and investors are making billions!

The cops of capitalism serve those who can afford their services.

To tackle both austerity and climate change we need to create an alternative economic logic.

Money needs to be used to fund alternatives to extracting oil. Solutions based on bringing a halt to extraction are always condemned as unrealistic, but they're the only way to stop sawing away at that branch.
Business as usual is rapidly becoming impossible. But simply halting extraction could leave all of us in trouble since we're so dependent on fossil fuels.
We need a just transition, with workplace conversion to create alternatives to the polluting industries.
The present approach, doing little or nothing, leaves future generations with an impossible bill to pick up.
The logic is just the same as with the banking crisis. Here too, short-term thinking and a system based on greed led to disaster in 2008, yet the debts created are being forced on the poorest in the form of austerity cuts.
Do nothing or accelerate the damage until it's too late - then make the rest of us pay for the mistakes of the rich and powerful.
It's an approach that must be challenged across the board.
To tackle both austerity and climate change we need to create an alternative economic logic. There's no contradiction between opposing cuts and protecting the environment. We all need a future that works.
That's why this Saturday October 20 I'll be marching with the Climate Bloc on the TUC demonstration. As the Climate Bloc says: "The climate crisis and the economic crisis have the same root causes in an economy rigged in favour of the richest 1 per cent."
We'll be backing the TUC campaign for a million "green" jobs and from defending indigenous peoples fighting climate change to workers fighting for an alternative to climate chaos we'll be marching for it.
We're meeting at 11am at St Paul's. Please join us.
Derek Wall is international co-ordinator of the Green Party of England and Wales.

CLIMATE BLOC ON THE TUC MARCH ON SATURDAY 20 OCTOBER... 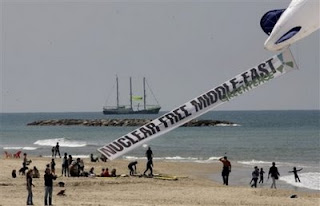 14.30–16.00 Reports from workshop and discussion of recommendations to be forwarded
to the Helsinki Conference, facilitated by Daniel Blaneyand Sarah Cartin, CND