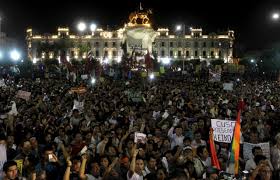 (This is on the protests against the pardoning of former Peruvian President Fujimori by Hugo Blanco, the BBC and most media outlets in the UK don't put this on the front page, will get a translation when I have a moment.  Fujimori's security apparatus put Hugo Blanco on their death list but he escaped before they could kill him) 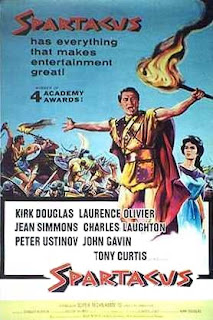 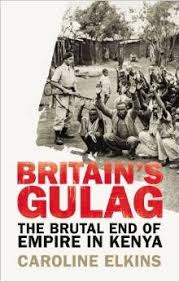 This is a devastating read.  We tend to think we are the good guys and girls but the historian Caroline Elkins catalogues in great and well referenced detail a tale of rape, degradation and humilation at the end of Britain's African empire.

During the 1950s Kenya's Kikuyu people, the largest ethnic group in the country, rose against British rule, largely because of increasing theft of their land which was given to white colonialists.  Access to land was both economically vital and essential to the construction of identity.  Drawing upon traditional religion Kikuyu people swore an oath to fight the colonialists and the Mau Mau rebellion was born.

White settlers viewed the Kikuyu as inhuman savages and a war of astonishing violence ensued with atrocities on both sides.

Caroline Elkins researched how virtually the entire Kikuyu population of 1.5 million people were forced into camps and brutalised.

The accounts of the brutality, often utilizing sexual violence, are indefensible and difficult to repeat.  They are also very well documented by Elkins.  She interviewed former settlers who boasted of the violence they used as well as many inmates of the camps.  Records from religious organisations, local government, letters from inmates and many other sources are drawn upon, this a meticulous piece of historical research.

I soon returned to Britain and then went on to Kenya for an exhaustive look into the official colonial records.  It wasn't long before I began questioning my earlier view of the camps and the British colonial government.  I found that countless documents pertaining to the detention camps either were missing from Britain's Public Record Office and the Kenya National Archives or were still classified as confidential some fifty years after the Mau Mau war. The British were meticulous record keepers in Kenya and elsewhere in their empire, making the absence of documentation on the camps all the more curious.  I came to learn that the colonial government had intentionally destroyed many of these missing files in massive bonfires on the eve of its retreat from Kenya.

To give a sense of the destructive scale, three different departments within the colonial government kept individual files for each of the reported eighty thousand detainees in the camps.  This means there should have been at least 240,000 individual detainee files in the official archives.  I spent days and days searching for them in the catalog of Britain's coldly efficient Public Record Office and in the dusty but orderly file shelves of the Kenya National Archives, but in the end I unearthed only a few hundred in Nairobi and came up empty handed in London.

After years of combing through what remains of in the official archives, I discovered that there was a pattern to Britain's cleansing of the records.  Any ministry or department that dealt with the unsavoury side of detention was pretty well emptied of its files, whereas as those that ostensibly addressed detainee reform, or Britain's civilising mission, were left fairly intact. (Elkins 2014:x-xi)

This is a very important book to read to understand the realities of Britain's Empire, a subject which is ignored or even celebrated in the UK.  Indeed as I write there are reports that an ethics of Empire will defend Britain's Empire from those who call it 'wicked'.

Brtian's Gulag is nuanced.  The brutality of the Mau Mau is acknowledged and from dissenting Army officers, MPs as varied as Labour's Barbara Castle and the right wing Enoch Powell, British voices (sometimes unlikely) against the oppression get a hearing too.

However the way in which racism is cultivated to dehumanise is well described.  And once dehumanised individuals can be killed and tortured without pause.

Lets not view Britain's Gulag as of purely historical interest.  Its been recently revealed that numerous documents dealing with controversial episodes such as the Miners Strike and the Northern Ireland conflict are missing from the Public Record Office at Kew, which Elkins visited.  The search for peace and reconciliation in Northern Ireland is pretty much ignored in the British media but the suppression of the Mau Mau sheds light on the Miami Show band massacre and the Glenanne Gang.  The process of white wash is continuous.

Elkins book is a must read. 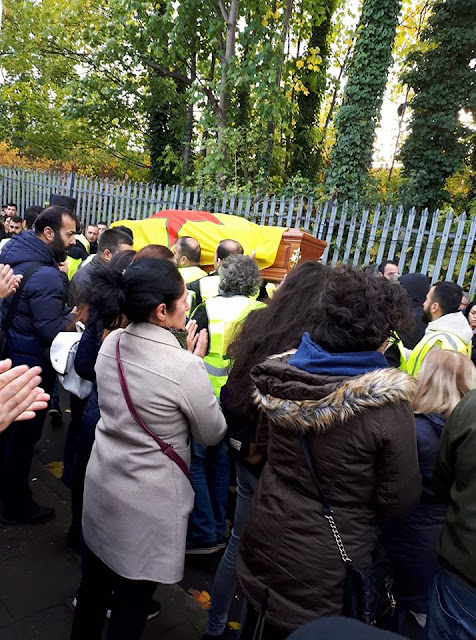 My friend Mehmet Aksoy was killed by Isis in Raqqa, Syria on 26th September this year.  He had been working as a journalist and communications officer for the Peoples Defence Force (YPG).  He was not a fighter but there instead to tell a story about how the Kurds and their allies were working to defeat the so called Islamic State and to promote the alternative of a democratic, diverse society.

Tragically at least five British citizens who have fought as members of the YPG or like Mehmet worked to support them without being fighters have been killed in Syria.  Just weeks ago, Jac Holmes, an IT worker from Bournemouth died while clearing land mines.

Mehmet’s funeral (see above) saw 3,000 people attend and he was buried in Highgate Cemetery in North London, near to Karl Marx.  I had worked with Mehmet on a couple of projects including a fundraising event for refugees and he had commissioned me to write a piece about Elinor Ostrom (an economist) and Rojava.  I like many others shed some tears when he was buried.

The Kurds and their allies in Northern Syria are continuously threatened by the Turkish Army, as I write, they are poised to invade and attack.  The increasingly dictatorial Erdogan regime has money, power and influence and is on a propaganda offensive against Rojava (Kurdish for ‘the west’) the self-governing Kurdish portion of Syria.

British fighters with the YPG have been on the front line in the fight to defeat ISIS but they don’t get any praise over here in the UK.  Indeed, they are often put on trial and Theresa May’s government treat them as if they were members of ISIS not the people who defeated ISIS!

I was dismayed to read an account in a Turkish newspaper by John Woodcock, theLabour Party MP for Barrow-in-Furness condemning the YPG and calling them terrorists.  I would simply ask John to meet and talk with my friends the Scurfields whose son, a former British marine, was killed in Syria fighting with the YPG against ISIS.  To me and many others Konstandinos Scurfield was a hero not a terrorist.  I would ask John to talk to former British fighters like Macer Gifford or Kimmie Taylor, there is another perspective to that of the Turkish government.  He might do well to meet the families of others British people who have died in Syria or perhaps those who have been rescued from slavery under ISIS by the Kurds and their allies.

I can see that John might not want to talk to former fighters or their families but I would ask him to consider that Turkish hostility to the YPG might be based on a history of discrimination.  Turkey criminalises discussion of the Armenian genocide and Kurds are strongly persecuted in the country still.

The Turkish government has proposed a new law which will ban the use of the words and terms 'Kurdistan', 'Kurdish city/cities' and 'Armenian Genocide' in parliament.


Parliamentarians who use these words or terms will be fined 12,000 Turkish Liras (3000 Euros) and be banned from participating in three sessions in the Grand Assembly.

For me when I read John Woodcock’s opinions it was as if Mehmet had been murdered all over again.  If like me you view the YPG as a force for good rather than terrorists you might want to send John a polite email via his office on john.woodcock.mp@parliament.uk or you can find him on twitter at @jwoodcockmp