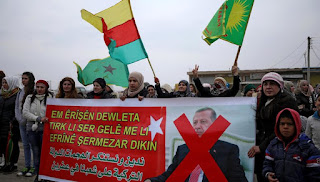 At the same time as we write and read this, they have cut off the electricity and water in Afrin, Rojava, the area and territory of the Kurdistan Women's Revolution and Democratic Confederalism. At this same time the Sultan Fascist Erdogan intends to complete the genocide in Afrin. He started bombing on January 20, facing the heroic resistance of women and men in defence of collective freedom; of the dignified life.

Today they advance on the capital city of the canton (Afrin) where they have taken refuge civilians who have had to flee the bombs, after mass murders. Erdogan says he will return these lands to their owners, when they have always been inhabited by Kurdish majorities. He is a murderous fascist and is committing a genocidal massacre before the eyes of the world, before our eyes right now.

Here is a text sent to us from Afrin containing the firm, energetic, hurt and anguished words of Bruno Lima Rocha.

While the army of men and women fights and faces a disproportionately superior enemy, the powers of the world, watch in silence. Intentional and cowardly accomplices intend that this uprising for the life of and from the women ends in a bloodbath so that a minority can continue to accumulate and so that the many of us will continue to be subjected and submitted to our resignation, occupation and submission. Right now, the terrifying sound of bombs and shots is advancing on a city that has proclaimed dignity, freedom, life and justice in democracy, matriarchal and woven to the earth.

Here a text sent to us from Afrin and the firm, energetic, hurt, anguished word of Bruno Lima Rocha. Turkey is a murderous state. Erdogan, a fascist sultan. The world, complicit and silent as death advances on Afrin and the women and men of the Kurdish revolution defend us all and are the only protection, in this infamous world, for those girls, children ... for that people who have shouted and built freedom.

No to domination and dispossession. Pueblo in Camino

Hugo Blanco is the historic leader of the indigenous people of Peru.  He publishes Lucha Indigena (where this statement was originally published) This is my rough translation using google! 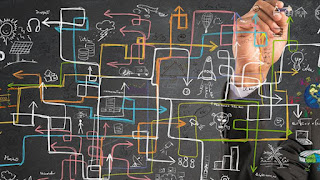 
We need to move beyond 'my party is good' and 'your party is evil'. Instead we need to think about systems.  The proposal that Caroline Lucas is good and Jeremy Corbyn less so or vice versa, seems unproductive.  The notion that we have an elite with noxious intentions cannot entirely be dismissed when one thinks of how many innocent people are imprisoned in Britain.  However it is a far from adequate way of understanding what is going on.  A simple moralism is always going to be too simplistic.

OK having stood as a General Election candidate for the Green Party against Theresa May, she kind of does represent evil for me.  It was instructive to complete a hustings with her (she dodged televised debates but under took a local hustings in Maidenhead).  Her support for arms sales to Saudi Arabia and Turkey, and her disdain for the Kurds in Syria who fight against ISIS, appalled me.  I could go on, one thinks of those who have died from benefit sanctions in the UK.

However we need to think not only of replacing 'bad' politicians with 'good' politicians or even of policies to make things better.  A society is a system and different elements tend to reinforce each other and to conserve the system.  A particular change of policy or leaders does not alone lead to systematic change.  Again the assumption that we are betrayed by leaders who are corrupted by power is inadequate, a society moves to a particular rhythm and changing this is very difficult indeed.

The assumption that politics is about understanding and changing systems provides a clear break with the usual way of doing things.  Quite radical policies tend to be mobilised to support an existing system.  Systematic change is extremely difficult to achieve, our society is a capitalist society, economics, ideas, politics, etc, etc. broadly reinforce the pursuit of profit.

There are no easy solutions to this, I certainly don't see capitalism as ecologically sustainable.  Introducing a land tax, nationalising major firms or introducing a basic income may or may not be desirable in themselves but each alone whether desirable or not, is not going to change the dynamic.

I tend to be critical of nationalisation and central planning for a variety of reasons.  Nonetheless what ever their virtues we can see how the nationalisation of the 1945 Atlee government, and its introduction of the NHS and welfare state, while bringing benefits did not transform the British system.

I am not proposing a reductionist view, economics may have a lot of weight but culture and a series of other factors are part of any system.  Neither I am a holist in the sense that the system can never be changed, however systems do tend to conserve themselves to a large extent.

Thus with the evolution of the world wide web and social media, we have seen fewer examples of wikipedia and more examples of platform capitalism of various types.  More profit from the sharing economy and less actual sharing, more concentration of power and wealth and less community gain, perhaps.

How we work with the systematic nature of a society to change the system seem to be a better way of framing the question of political action than simply condemning the ruling party as fools and knaves (although having debated with May I know there is something in this thesis!).

Massimo de Angelis's recent book on commons does tackle the issue of systems, the promotion of commons does not transform the economic system, even though commons have many positive features.

The notion of 'overdetermination' seems vital in understanding how causes inter act.  Ecology as a science studies relationships within systems, natural systems are different to social systems, but the systematic approach of ecology is likely to be instructive.  Cybernetics also relates to this.

I was also remind of the importance of a systems approach in my thinking in discussion with Graham Jones, I will be interested to see if his new book for Polity takes up this challenge.

His suggestions for an ecology of political action do look interesting!

Numerous commentators have called for a turn towards an ecology of organisations – Plan C’s theory of the Social Strike, and Alex Williams and Nick Srnicek’s counter hegemonic project in Inventing the Future both rely on this concept. However, an outline of the features of such an ecology, or how it might be built, has yet to be specified. We can combine ideas from social movement studies literature, with those found in the study of ecological resilience and complex adaptive systems, for lessons in how to create a growing, dominant and resilient network of resistance and alternatives. We have to be careful of course, because for all the similarities of dynamics found between social systems and ecologies, they are not one and the same. Social systems are fundamentally maintained through communication of symbols and the capacity for conscious reflection, unlike material ecological systems. But with that proviso in mind, we can nonetheless bring together a series of conceptual tools for some guidance on building counterpower in a network society.


This is from his shock doctrine of the left article which can be found here.

Politics is about change and change needs to be based on deep thinking about how systems work and specific action to promote transformation.  The necessary change is multi faced.
at March 04, 2018 No comments: