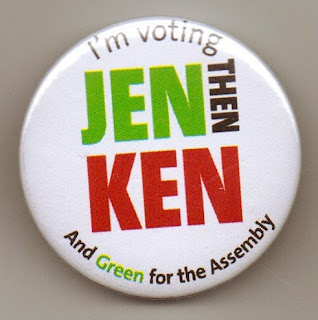 Its vote Jenny and transfer to Kenny, no doubt the Evening Standard will be spinning for the bankers they love Boris and don't want fares cut and they are very happy with Bozzer's 50p tax cut victory.

The Green Party in London has made me proud, lets all get out and work for Jenny and transfer the votes to Ken.

What: launch of Green Party’s recommendation of Livingstone as second preference candidate

When: 2pm Wednesday 28 March 2012
An extraordinary meeting of the London Green Party this week decided to recommend Ken Livingstone as second preference choice for Mayor after first choice Jenny Jones.
Livingstone spoke to around 70 members at the Party’s Headquarters on Leonard Street and fielded questions on his record and policies.
After over an hour of discussion, a vote in favour of recommending Livingstone as second choice carried with a clear majority.
Green Party Mayoral candidate Jenny Jones said: "The voting system gives Londoners a chance to make a positive Mayoral first choice for a more equal, healthier and affordable London.
“However, should I not be counted among the top two candidates after the first round, then I want a Mayor who will work with Green Party Assembly Members to deliver on pay equality, less pollution and cheaper fares.
“Ken Livingstone is far from perfect, but we know from his last time as Mayor that we can work with him to make positive changes in a way that would be impossible with either Boris Johnson or many other senior Labour politicians.”
Livingstone said: ”What we are seeing is that as we get closer to the election a broadening alliance of people wants a fairer London.
“The Green endorsement for second preferences is a key building block to winning change on May 3rd. I am very pleased that the Green Party has decided to encourage their supporters to cast their second preference votes for me.
“I look forward to working again with Green Assembly Members, including tackling air pollution, creating a fairer London, and improving pedestrian and cyclists’ safety.”
Discussions focused on the clear desire among members to help prevent a further four years of Boris Johnson’s Mayorship, and the clear differentiation between recommending the Labour Party and Livingstone as a candidate, the man himself frequently opposing Labour Party policy.
Members emphasised that the priority of the campaign was to increase the number of Greens elected to the London Assembly in order to best hold the successful Mayor candidate to account.
Members raised particular concerns over Livingstone’s record on road building, the poorly regulated financial sector and air pollution.
However, the meeting meeting voted to support the recommendation after hearing pledges to curb top pay at City Hall, help the lowest paid workers, end cheats and evasions over air pollution used by the current Mayor and Government and financially support boroughs wanting to introduce 20mph zones.

I am saddened not surprised to see the Greens endorse Livingstone. Having tracked his career over many years, my considered view of him is that he is a totally unprincipled reactionary pro-capitalist hypocrite.

Some detail on Livingstone can be found here

In very recent times he has (again: nothing new) been revealed as a serial tax avoider. The disgraceful way his last administration not only feathered the nests of cronies like Jasper, and kow-towed to the City of London sticks long in my memory, but evidently not that of others.

Unless and until Left Greens see through a fake like this, we will not get anywhere, nor really deserve to.

The Greens AND Ken?

Not going for the Jewish vote then I assume?