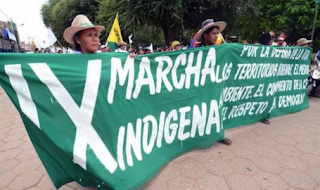 Editorial 84
THE STRUGGLE IS THE WAY FORWARD

In Peru and other parts of the world the great majority of people are coming to realize that the heads of state, parliaments, tribunals, armed forces, police and mass media are just tools of the big transnational corporations.
Increasingly, they understand that the corporations, with the legal system and media at their service, have no other goal than to amass the greatest possible wealth as quickly as possible.  Big capital is aware that this goal demands a merciless attack on the majority of humanity and the environment.  Toward this end, the corporations are prepared to exercise a dictatorship that oppresses the people in ever more severe ways, all done in the name of "democracy".  They tell us that this must be according to the norms that they set, that only then can the situation be brought under control.
The people's response to this is that it does not and cannot work, and they go into the streets in a great variety of protest actions, sweeping aside the rules set by their oppressors.  They show their collective strength and force the enemy to retreat.  Turkey, Brazil and Chile are all rumbling.
Edward Snowden unmasks the world's most powerful government, that of the USA.  He shows that it spies illegally not only everyone in its own country but on its closest allies' politicians and diplomats.  In going after Snowden, the American government tramples on international diplomatic norms and forces the governments on which it spies to kneel before it.
In Peru we see scandalous demonstrations of the corruption of big capital's minions: amnesties for drug traffickers sold by Alan García, Toledo's inexplicable fortune, disbursement by parliament of posts on the Constitutional Tribunal, Public Defender's office and Central Reserve Bank, the payment of millions in bonds from the agrarian reform to the Peruvian Bank of Credit by functionaries of that same bank, etc.
While the millions flow upward, the poor are crushed under laws established by the corrupt.  State workers sink under the Service Law -- which would better be called the Servile Law -- which takes away their job security, their right to unionize and collective bargaining.  The University Reform Law reduces university to dependence on the executive branch, big capital's servants.  They aim to revive mandatory military service, but only for the poor.  They claim that there is no money to pay soldiers even the minimum wage, with no mention of the scandalous salaries and privileges of high-ranking officers directly serve their corporate masters.
The term "small and middle businesses" (PYMES) is stretched like rubber to the benefit of capitalists who keep the workers in poverty by taking away their rights "in aid of small and middle enterprises".  There is special legislation to decrease the rights of farm workers to a dreadful extent "in aid of agricultural exports".  These exports are in the hands of transnational corporations that rob water and land from the small farmers that provide us with wholesome food.
Open-pit mining is one thing that we at Lucha Indígena consistently condemn.  This industry, in the hands of huge transnational corporations, represents a savage attack on the environment by depleting and poisoning the water needed by small agriculture.  Hydroelectric plants in the service of the mines displace native people and peasants from the land that supports them and feeds the people of Peru.  The extraction of hydrocarbons degrades the Amazon and kills native people.  Although the International Labor Organization's convention 169 mandates prior consultation with native communities, this is disregarded.  The government does not even bother with its usual pretence of compliance.
This corruption and oppression are nothing new.  What is new is that the poor are saying "Enough!" and are starting to move.  The people are certain that it is their struggle that has forced a retreat in the corrupt distribution of government posts.  The poor are increasingly aware that the way forward lies in struggle.
The urban populace is now adopting the approach that has worked against the murderous mining enterprises in Tambogrande, Ayabaca, Hunacabamba, Cocachacra and Puno.
We should note that many struggles have as their goal not just the well-being of the sectors directly involved in their organization.  Rather, they stand to benefit the wider society.  Workers fighting for safe drinking water are also fighting against privatization of this resource.  The port workers are fighting to strengthen state ports.  Petroleum workers, likewise, are fighting to strengthen the state-owned enterprise.  Medical doctors and others in the health sector are fighting to strengthen health care for everyone.
Some sectors are progressing faster than others, such as the workers in Argentina and other countries that have occupied their factories and are running them democratically for collective benefit.
This is a beginning.
The partial victories in popular struggles are gradually convincing broader and broader sectors of society of where the struggle should go.  It must lead to humanity taking the future into its own hands in a truly horizontal, democratic fashion.  This will be accomplished by taking power out of the hands of the transnationals that now rule the world and are threatening humanity with extinction.