Hugo Blanco 'Why are they so terrified at the sight of the people governing themselves and directing their own footsteps?' 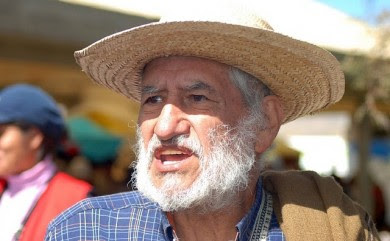 'Sub-Commander Marcos -- whose identity is not publicly known -- has not died in the usual sense.  Rather, the individual known as Marcos has withdrawn from that role for reasons stated here'


THE DEATH OF ZAPATISTA SUB-COMMANDER MARCOS

The hierarchical society that is crushing us cannot imagine a horizontal society in which there is no chief and decisions are made collectively.  On three occasions the Zapatista native communities have collectively organized and directed mini-schools (escuelitas).  This is carried out with such efficiency that thousands of students from many countries have been able to learn how a new world is being built.
When Marcos stopped appearing in public, the vertical system's press and spokespeople said that he must be either sick or dead.  Marcos, himself, contributed to this conclusion by admitting to several zapatologists (i.e. intellectuals with specialist knowledge of the Zapatista movement that he had been ill, asking them not divulge this information.  This was of course the best means of getting the news out.  ("It's a secret.  Don't tell anyone.")
The following quotations and comments together serve as a synthesis of the Zapatista outlook.

"Against death, we demand life.  Against silence, we call for the word and respect.  Against forgetting, memory.  Against humiliation and contempt, dignity.  Against oppression, rebellion.  Against slavery, freedom.  Against dictatorship, democracy.  And against crime, justice."
"Through the war that we are waging, we have been privileged to come to the attention and generous hearts of people both near and far."
After the shooting stopped, the war continued.  It was the furious war of neoliberalism against humanity.  The put the Zapatistas in a dilemma.  Either they prepared for war or they concentrated on building a new world.  They chose the second option, as has been witnessed by thousands of graduates of the mini-schools.  There they teach democracy, freedom and justice, as well as wholesome nutrition, good health and education.
"In the course of these 2 years a complex, multi-dimensional picture of the EZLN has emerged."
"At the start of the uprising, those who today are pursuing the struggle and directing the resistance were still small or not yet born."
Besides age, there are other dimensions that show signs of progress.  "The dimension of class: moving from the educated middle class to the native peasantry.  That of race: from a mainly mestizo movement to one more purely native.  And, most importantly, that of attitude: from revolutionary vanguardism to commanding by obeying; from taking power from above to creating power from below; from professional politics to the politics of everyday life; from leaders to the peoples; from the marginalization of women to their direct participation; from mocking those who are different to celebrating our differences."

"Why are they so terrified at the sight of the people governing themselves and directing their own footsteps?  ...  The cult of the individual finds its most fanatical expression in the cult of vanguardism."
"And it has been precisely this, the native people in control and a native as representative and spokesperson, that they find so frightening and confusing.  It drives them to keep looking for someone who can identify the vanguards, chiefs and leaders.  After all, there is also racism on the Left, especially that part of it that claims to be revolutionary."

"If only they could see who small they are.  We must ensure that they understand their own insignificance."
"In this way a complex maneuver of distraction was undertaken, a dreadful and amazing magic trick, a malicious trifling with our native heart.  The native wisdom was challenging modernity in of its very bastions, the news media."
"This was how the personality known as Marcos began to form."
"We needed time to be ourselves and to find those who would know to see us as we are."

"The people had made impressive advances at the core of the movement.  Then came the course of instruction on 'The Zapatista Road to Freedom".  ...  We became aware that there now existed a generation that could look us in the face, that could listen to us and speak without waiting for guidance or leadership, without claiming either to submit or to follow."
" The Zapatista struggle had arrived at a new stage, and Marcos the personality was no longer needed."

So it was that Sub-Commander Marcos passed from among us.