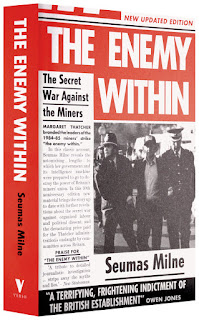 
Milne is routinely vilified in the media but lurid accounts often ignore his authorship of The Enemy Within, Milne's role in the Labour Party shows that Corbyn is providing a radical break from Labour past.  Whether like me you see hope in this or like the mainstream express anxiety, if you want to understand Milne a starting point is The Enemy Within.  Well researched, beautifully written, nobody on the left in Britain in 2017 can ignore it.
at August 02, 2017