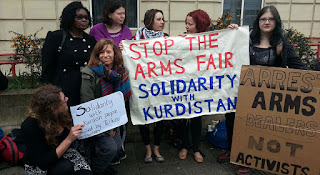 Peace in Kurdistan condemns the Defence and Security Equipment International arms fair being held at the ExCel Centre in London’s Docklands from 11th to 14 September 2017. It is the world’s biggest arms fair and will host guests from among the world’s most oppressive regimes, including from Turkey. This exhibition, promoting the wares sold by the merchants of death, will be addressed by British government ministers. Britain is the world’s second largest, and Europe’s largest, arms exporter. Over half of the weapons that British companies sell go to the Middle East. British companies and politicians share responsibility for the murder and mayhem inflicted on the Middle East for decades. There are some 9,000 arms companies in the UK, including smaller businesses. These firms seek to profit from the war being waged by the Turkish state against the Kurdish people.  This must be stopped.
Kurdish people have a legitimate right to self-determination and their representatives, including their gaoled leader Abdullah Ocalan, have persistently sought a peaceful solution to the Kurdish question. Their pleas and proposals for peace have been rejected by Ankara with no serious pressure coming from Westminster. The Turkish government, headed by President Erdogan, has used military means to try and suppress any manifestation of the Kurds and their democratic aspirations. The Kurds are confronting a war of extermination. With at least six Turkish arms companies attending the exhibition and the British government issuing export licences for arms sales to Turkey worth £466 million from July 2013 to June 2016, Britain is facilitating and encouraging the Turkish state’s war on the Kurds and equipping it with the means to kill more ruthlessly. In 2017, Britain’s biggest arms company, BAE Systems, signed lucrative deals, worth over $100 million, with Turkish arms companies to develop fighter jet production in Turkey and to sell it fighter aircraft. This increases the potential for escalating war against the Kurds and, given President Erdogan’s regional ambitions, spreading destruction across the Middle East – all for the benefit of corporate profits.
In February 2017 the UN High Commissioner for Human Rights issued a report on human rights in the predominantly Kurdish south-east Turkey covering the period between July 2015 and December 2016. The report says some 2,000 people were killed in security operations, including 800 state forces. It details ‘enforced disappearances; torture; destruction of housing and cultural heritage; incitement to hatred; prevention of access to emergency medical aid, food, water and livelihoods; violence against women; and severe curtailment of the right to freedom of opinion and expression as well as political participation.’ There has been not a single investigation into unlawful killings of hundreds of people. ‘A series of laws … has created an atmosphere of “systematic immunity” for security forces.’ The number of displaced persons in south-east Turkey is put at 355,000 to half a million people. In towns and villages, state killings are followed by ‘mass displacement of the survivors and the destruction of their homes and local cultural monuments’. ‘The centres of towns and cities across south-east Turkey have been described as empty moonscapes and vast parking lots’ with much ‘damage due to the use of heavy weapons and, possibly, air-dropped munitions … systematically demolishing entire neighbourhoods.’ By selling arms to Turkey and by giving its government political and diplomatic support, Britain shares a responsibility for this slaughter and destruction. Turkey being a NATO member, selling weapons to its government is legitimised by the US, British and other European governments. This is unacceptable: Turkey must be condemned and ostracised as an international pariah, not armed to the teeth.
Since the 15 July 2016 failed coup attempt, the Turkish government has arrested, fired or suspended from work some 190,000 people. Approximately 50,000 people have been gaoled, including 13 People’s Democratic Party (HDP) MPs. Central government has taken direct control of 82 municipalities in predominantly Kurdish areas of the country, suspended democratically elected co-mayors and gaoled 90 of them on terrorism charges. 178 journalists are in Turkey’s prisons and over 150 media outlets have been shut down. President Erdogan and his Justice and Development Party (AKP) government have imposed a dictatorship on the Turkish people. Any manifestation of criticism of the regime is ruthlessly suppressed; even the director and chair on Amnesty International’s Turkish branch have been arrested and gaoled accused of supporting terrorism for speaking out on the flagrant and systematic rights abuses.
The Kurdish people continue to resist and demand recognition of their rights. Erdogan and his government are currently threatening to escalate their war against the Kurds by launching an all-out attack on Rojava, the autonomous and predominantly Kurdish part of northern Syria. In his determination to subdue the Kurds, wherever they may be, President Erdogan has shown he is willing to mobilise and arm jihadi groups, including the so-called Islamic State and Al-Qaeda-linked jihadists. People in Britain must speak out by demanding that their government opposes the warmongering of President Erdogan, stop arming the Turkish state terrorists and their auxiliaries, and support the cause of democracy and rights for the Kurds. Halt the war machine and end the UK's profits of death.
For information contact:
Peace in Kurdistan
Campaign for a political solution of the Kurdish Question
Email: estella24@tiscali.co.uk
www.peaceinkurdistancampaign.com
Contacts Estella Schmid 020 7586 5892 & Melanie Gingell - Tel: 020 7272 7890