The Economics of Common Pool Property 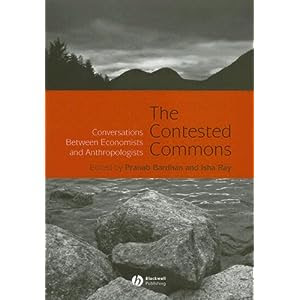 The tragedy of the commons was a concept put forward by a biologist but Garrett Hardin’s underlying assumptions, when he developed it, are drawn quite distinctly from economics.   As Elinor Ostrom, who shared a Nobel Prize in economics for her efforts in challenging the idea of the 'tragedy', noted while Hardin was a biologist, he shared the assumption of most economists that human beings focus on personal gain and found cooperation between each other difficult. She noted that Hardin echoed the logic of the distinguished economist, H. Scott Gordon, who had argued that,‘The fish in the sea are valueless to the fisherman, because there is no assurance that they will be there for him tomorrow if they are left behind today (2009: 522).


While economists claim that their subject is a 'value free' social science, their critics argue that it is based on particular beliefs that may be open to discussion and interpretation.  These are worth briefly outlining if we are to understand the strengths and potential weaknesses of such a way of examining commons.  The word ‘economics’ is derived from the study of 'oikos' the ancient Greek word for a household.  According to the well-known definition from Professor Lionel Robbins, economics 'is the science which studies human behavior as a relationship between given ends and scarce means which have alternative uses' (1932: 16).  Economists focus on concepts such as choice, resources, rationality and opportunity cost, all of which are seen as neutral rather than culturally determined and can be applied universally to different human societies.  It is assumed that human being need to make choice, in fact, the concept of choice is perhaps the essence of economics.  Resources that can be used to produced goods or services can be used in different ways.  We must choose how to use such resources.  Opportunity cost is the notion that when one choice is made, other choices are given up.  The choice or choices not made are the opportunity cost.  There is a strong assumption of 'rationality', within economics, which stresses that individuals pick the alternatives that provide them with the most personal gain.  Thus Erik Olin Wright notes, 'economists assign a privileged place to self-interested rational action in their micro-level explanations of social phenomenon, and thus give central weight to the problem of incentives in explaining variations across contexts' (2008: 235).


Implicit in economics is the notion of methodological individualism, which the political philosopher Jon Elster has defined in the following terms, 'The elementary unit of social life is the individual human action.  To explain social institutions and social change is to show how they arise as the result of the actions and interaction of individuals' (Elster 1989: 13).  The interaction of communities is largely ignored by economists who may find it difficult to understand collective forms of property and communal action.


Economists argue that individual choice determines outcomes, for example, if more consumers are prepared to pay for a product, such increased demand tends to push up the price.  In turn price increases tend to increase profits and motivate producers to provide what consumers desire.  Individual preferences based on the need to gain the maximum personal benefit drive the economic system.   Individuals compete to try to achieve the greatest personal benefit.  The commons, in its varied forms, seems to cut across many of these assumptions because of the apparent free rider problem.  Garrett Hardin and others critical of common pool property arrangements, argue that in a commons individuals will take advantage of others, who might conserve a resource, by using it more intensively.  Apparently selfish behavior from a 'free rider' is perversely rewarded and economists assume that an individual cannot trust other individuals to conserve shared ground.  Thus those who act ethically and attempt to promote sustainability, say by removing their cattle from the commons, will see the commons destroyed if others continue to put their cattle on.  The rational individual may even put more cattle on the commons, exploiting the good action of the supposedly moral individual.  Self-interest pushes ethical action to the margins and, as Garrett Hardin argued, means that commons must be eliminated if land is to be sustained ecologically.  Thus he sociologist Erik Olin Wright suggests that for economists 'a well-maintained commons is a puzzle' and as such 'cries out for an explanation'.  He notes that economists tend to be surprised and confused that commons might work (Wright 2008: 234).

In contrast, Elinor Ostrom has used assumptions of broadly rational methodical individualism to suggest that in particular circumstances commons can be maintained to sustain shared prosperity.  Given particular conditions it is possible for the bounded commons, particularly on a small scale basis to be preserved.  Individuals can join together and agree to maintain conservation processes, especially where sanctions can be applied and rules are mutually agreed rather than imposed by outsiders.  The commons, can as Elinor Ostrom argues, in many circumstances be an economically rational solution to resource management.


Elinor Ostrom might be seen as moving beyond economics in her largely 'economic' account of commons, certainly there are number of reasons to see her approach as more sophisticated and flexible than previous attempts by economists to analyze common pool property.  However,  she has been  criticized as an 'economic imperialist' who applies the notions of traditional economics to areas of human life where they are inappropriate, rather than making economics more cultural,  she might be seen as making social and cultural matters part of the economic approach of costs, benefits and rational maximizing behavior (Fine 2010).  Ostrom's approach to economics is quite complex and it is important to understand her theoretical approach developed with her husband Vincent if we are to assess her description of commons in terms of its relationship to questions of culture.


The Ostroms are various described as members of the 'Bloomington School' or 'New Economic Institutionalists' or as advocates of ‘institutional analysis and development’ (IAD).   Bloomington refers to the main Indiana University campus where the Ostrom's were both based.  'Institutional analysis and development' is the particular variant of New Economic Institutionalism (NEI) developed by the Ostroms.  NEI is a product of market based economics; it is rooted in the thought of individuals like Austrian economists such as Friedrich Hayek and Ludwig von Mises whose assumptions seem much closer to those of Garrett Hardin than Ostrom (Aligica and Boettke 2009). Indeed, as we have seen Ludwig von Mises specifically criticized the notion of common pool property.  Elinor Ostrom was even a President of the Public Choice Society, public choice is an approach to governance which is strongly critical of the state and advocates market based policies such as privitization.   Rational choice theory is at the heart of public choice theory and NEI, an approach which seeks to extend economic reasoning, based on costs and benefits, to sociology to explain human behavior outside areas normally covered by economics.    Elinor and her husband Vincent did not abandoned the rational choice theory that underpins public choice but took it in a new direction.  NEI is based on the assumption that rationality is 'bounded' i.e. individuals follow self-interest but within a particular context shaped by particular values and circumstances.


Thus the New Institutionalists explicitly bring in the influence of particular institutions and varied culture.  From their perspective they build on concepts such as rational choice but apply them in what they see as a messy, complex and often rather irrational world.  From the perspective of much traditional economics this is boldly radical, from that of disciplines such as sociology and anthropology it remains rather conservative.  Maximizing behavior continues to drive the models used, rather than alternative goals.


Elinor Ostrom argues that property rights are not simply 'state' or 'private' and that, in many circumstances, it is impractical to replace commons with private property.  Through negotiation and learning individuals can often get together and find ways of managing common property so that, through collective action, individuals can maximize their net collective benefit.   From her perspective, failure to work out common rules and apply them would lead to the destruction of the commons, so self-interest is served by establishing consensual frameworks.  Such consensual construction of effective rules may, according to Ostrom, be difficult to achieve in some circumstances, but is far from impossible.  The approach of unrefined rational choice theory that suggests that cooperation is virtually impossible, because of the Prisoners’ ’ dilemma and similar models that invoke the free rider problem is rejected by Ostrom.

The Icelandic economist Thrainn Eggertsson sums up the neo-institutional approach to commons noting that commons are often efficient economically but their relative benefits depend on social and political factors as well as pure economic considerations(1993:20).


This is approach is a form of political economy, in that political assumptions and institutions are seen as shaping economic decision making.  The rules depend on the institutions constructed and institutional design is a political act.   Even at the level of a Japanese village or indigenous territory in the Ecuadorian Amazon, the politics of rulemaking and negotiation is apparent.  This approach is based on the development of particular cultures, which are refined, transmitted from generation to generation and evolve over time.  Such cultural foundations of an economic system are usually ignored by economists but are of vital importance to both Ostroms and to other institutional economists.
There is also a good article here from the Economist magazine on the commons.
at December 27, 2012