Statement from Jeremy Corbyn on #Afrin 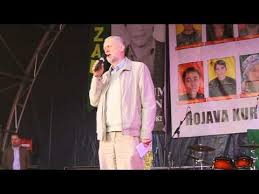 (Photo from Newroz, a year or two ago!)

Statement from Jeremy Corbyn on Afrin
On Saturday's #DefendAfrin demonstration in London, Dan Carden MP read this statement from Jeremy Corbyn:
"I send my solidarity to the Kurdish people of Syria and all over the world. What is urgently needed is a ceasefire, de-escalation and a negotiated political solution - not further escalations and interventions in a conflict that has already led to huge numbers of deaths and refugees. Multiple interventions by outside powers have increased the suffering and destruction and intensified tensions in the region. Turkey's air and ground assault in the Afrin region is already causing civilian casualties including among refugees from other parts of Syria. The British government has failed to consistently oppose foreign interventions in Syria and is itself involved in the US-led bombing campaign. We have instead a moral obligation to throw our weight behind pressure for a lasting peace and political settlement in Syria, including the withdrawal of all foreign forces engaged in the conflict."

Jeremy has a very strong record of solidarity with Kurdish people and  is a patron of Peace in Kurdistan.

Jeremy has been subject to strong press attacks because of his support for Kurdish liberation, click here.

I would like the Labour Party to be making strong and regular statements opposing Turkish attacks on Afrin, as has Caroline Lucas and Jonathan Bartley, the Green Party co-leaders, here

Boris Johnson and Theresa May have, in contrast to Jeremy Corbyn and the Green Party, shown their sympathy for Turkish 'security', http://factcheckingturkey.com/syria/claim-us-and-uk-strongly-criticize-afrin-operation-433 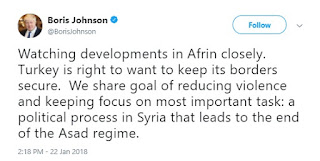