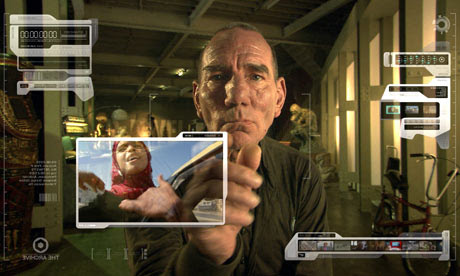 The age of stupid film asks are we stupid.

If we ignore the perils of carbon trading, we are stupid...it doesn't work.

If we ignore the use of biofuels based on cutting down rainforests, a solution to climate change that makes it worse we are stupid.

If ignore Cuba's success at using permaculture, renewables and public transport to slash fossil fuel use, we are stupid.

And if we ignore the indigenous who are the cutting edge of the resistance to climate change and winning some big battles we are really stupid.

When will some one make a film about my friend Hugo Blanco, to ignore him would be really dumb.

So please Franny Armstrong make a picture about Hugo Blanco, Pete Postlewaite could play him...just think would any one make a film about 'El Che', well for me while Che was great, Hugo Blanco is better even than Che and still working for revolution today in 2009 just like he was in 1962.

For the time being here is an article about Hugo...please film makers, read it and then start putting a script together.

Perhaps I am being greedy I was in an ecosocialist political group with Keir Starmer and he was the star of Franny Armstrong's last film McLibel....Hugo Blanco - La Película, por favor....

The western hemisphere has a new name. On October 12, indigenous peoples from many countries met in Bolivia to celebrate the United Nations declaration on their rights, and once again rechristened (so to speak) our continents Abya Yala.
In the Kuna language, this means "land in its full maturity." Amerigo Vespucci, an Italian explorer of the late 1400s, lost his naming rights to descendants of settlers who arrived 10,000 years earlier.
The rising sense of power among the hemisphere's 50 million indigenous people is transforming politics in what used to be called South America. But few people have been changed as profoundly by this new politics of identity as Hugo Blanco, the legendary Peruvian Trotskyist revolutionary.
It was Blanco, back in the 60s, who invented the now famous chant of peasants and campesinos the world over: Land or death.
During a lecture tour of Canada last month, he showed how deftly he has wedded old-style Marxist revolutionism to his relatively recent encounter with his own indigenous heritage.
At a meeting at a Ryerson lecture theatre in September, Blanco sports the typical floppy sheepskin hat worn by the Quechua people of the frigid mountains of southern Peru. I only learn afterward that the young-looking 73-year-old wears the hat at all times on doctor's orders, for fear that his skull, which has suffered too many police beatings, can't withstand an accidental bump.
Even with his disarming appearance, Blanco's opening lines surprise me. They're nothing like what I remember from the fiery speeches that almost got him executed when he was tried for his role in a 1962 armed peasant revolt.
The reason native politics are so charged today, 500 years after Europeans invaded, he begins through a translator, is that mines and oil and gas wells are poisoning Pachamama, Mother Earth.
And the aggressive materialism of global corporations is destroying "ayllu," the indigenous sense of community that encompasses every being in a village, including hills, rivers, animals and plants, each of which is endowed with a spirit.
But he's still a socialist, he says at the end of the lecture. After all, reports of Inca civilization inspired Voltaire and Thomas More, contributing to Europe's tradition of utopian socialism.
One of Blanco's daughters, raised in Sweden during one of his many periods of exile, once led Swedish tourists through a Peruvian village and was told it looked like socialism. You have that backwards, he recalls her telling the Swedes; socialism looks like this.
But the world has changed since his youth, he says. "When I was young, I took up the struggle for equality. Now the struggle is for the survival of the species."
Blanco, educated in a radical European culture when he was a student in Argentina during the 1950s, confesses that he is still a recovering Eurocentric. It's easy to see he's struggling to make the transition from the polemical truths of his youth to something else.
South American radicals "copied our social analysis from Europe," he says, "yet socialism, social democracy and Communism have all been defeated in the South.
"I don't know how much Eurocentrism is still in me," he adds. "I am in the process of overcoming. We must initiate this revolution within ourselves."
What does this mean for future organizing? He doesn't know, "but little by little we move forward." The newspaper he edits, Lucha Indigena, follows what indigenous people are doing, not the line of a political organization such as the one he once led. Many of his statements end with a quotation from the Spanish poet Antonio Machado y Ruiz: "Walker, there is no road. The road is made by walking."
Working without a compass is something he says he learned from studying the Zapatistas of Mexico, another country he spent time in as an exile. Blanco has a totally different sense of power than the one he held during the 1960s, when the struggle for campesino and worker power was at the heart of the manifesto Land Or Death: The Peasant Struggle In Peru that he wrote on death row in prison.
"Among revolutionaries, we were negatively affected by an obsession with power," he now says. His movement has since overcome old-style illusions thanks to the experience of pseudo-revolutionary Shining Path terrorists, who once ordered him killed, he says.
Indigenous communities practised consensus, he says. "We are not about taking power, but building power," he says. He now likes to organize "peasant circles" that displace judges and corrupt government officials with self-managing groups at the municipal level.
I luck into a two-hour after-lecture dinner with Blanco, Phil Cournoyer, the translator of his memoirs, and assorted friends at a nearby Internet café serving Somali food.
When Blanco chanted "Land or death," Cournoyer tells me, the activist had "an incipient understanding" that it was different from the Hispanic tradition of "Fatherland or death," a popular cry in Cuba. It reflected a deep-seated and intuitive psychological and spiritual understanding that land, identity, meaning and life were one continuum.
"It is not the earth that belongs to the people but the people who belong to the earth," Blanco clarifies.
From the leader of militant land reform during the 1960s comes a land reform philosophy for the 21st century.
news@nowtoronto.com
at March 15, 2009