Review: Capitalism and its Alternatives by Chris Rogers. Zed Press 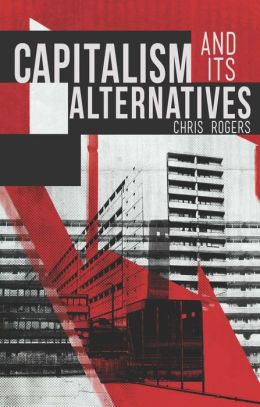 Capitalism and its Alternatives by Chris Rogers. Zed Press

Chris Rogers attempts to describe contemporary capitalism, to suggest that it is inevitably crisis ridden and that an alternative is needed. He also describes various alternatives to capitalism. This is a relatively short and admirably clear book.  It provides a good introduction to political economy and Chris to his credit summarises much interesting material, much of which will be new to readers, with considerable economy.  I have two general criticism, though.  First, the book is ambitious but at 170 pages too concise.  This means that many important topics are ignored, for example, the ecological ill effects of capitalism are ignored and discussions of topics such as Marx's conception of crisis are far from exhaustive. My second criticism is political, while he clear wishes to end capitalism, his perspective via the autonomist Marxism of John Holloway, seems inadequate to do so.
Chris Rogers provides a very solid critique of attempts to build a reformist anti-capitalism using the state and of revolutionary Leninism.  I agree that an alternative to capitalism must be a process not an outcome or a utopia, we will have to build to create something that works without crisis. Yet the alternative of a bottom up, apparently spontaneous movement can also be criticised.  Rogers is inspired, like Holloway, by the Mexican Zapatistas who built their own self-organised community rather than seeking to become an electoral alternative, taking over the Mexican state. Yet the other alternative of taking state power and using it to make change, one thinks of Venezuela, Bolivia and Cuba, seems to have had more material effect than the Zapatistas who have been rather marginalised and repressed.  The point clearly is that so far political alternatives seeking to over come capitalism, in a capitalist world, where the rich and the powerful retain power, have either been marginalised or deformed.  Rogers' criticisms are relevant but his alternative conception seems, while attractive and far too vague.
A more sustained discussion of the weaknesses and strengths of the Latin America left would have been valuable. The sometimes antagonistic relationship between states and social movements should be acknowledge however Latin American left governments have generally been both propelled by social movements and indigenous and provided them with more space to create communities and experiments.
Anti-capitalism demands communal ownership, the idea that property is either private or state, can safely be discarded.  Elinor Ostrom produced a detailed study in 'Governing the Commons' of 'commons'.  She examined where communal ownership worked and where itfailed. In doing so far from creating a blueprint, she came up with research that might be used to help commons work better.  Chris Rogers briefly mentions commons but might have benefitted by looking at her work.
Nonetheless while it is possible to criticise Rogers book, none of us have clear answers to the question of growing alternatives to capitalism, in his clear and cogent book, he makes us think more deeply but how to bring about change.  In provoking thought and showing that capitalism is a human construct and we humans can build something better, he should be applauded.
at September 11, 2014