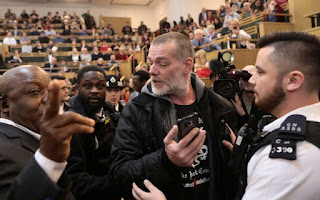 
A meeting of the Fabian Society addressed by London Mayor Sadiq Khan was heckled by a dozen or so member of the White Pendragons, a right wing group.  They shouted pro Brexit slogans, brandished US flags and advocated for Donald Trump.  So far so straightforward, a previous unknown group, they are part of the largely white, male, British far right, a movement made up of individuals moving between UKIP, the BNP,  the English Democrats and EDL.  In other parts of Europe similar individuals are in government, one thinks of Poland or Austria. 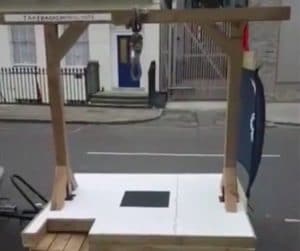 It is distressing to see mock gallows erected with a rather frank threat aimed at London's first Muslim mayor.  In the 1930s they would have marched against Jews and I guess in a future decade Hindus or Jains might be the source of their alarm, equally if we go back to the 18th century and the Gordon Riots, Catholics would have been the sectarian target.

So far so bad but so predictable.  The white pendragon incidentally is said to be a reference to the flags of Hengist and Horsa who led the Saxons, Angles and Jutes who invaded Britain in the 5th Century AD.  In fact Hengist and Horsa landed in Herne Bay, from where the White Pendragon's spokesperson Davy Russell harks.  Davy, a former member of the English Defence League (EDL) has been described as 'the Herne Bay shock jockey'.

Islamophobia is a sadly mainstream hatred but the Fabian Society is vilified for more obscure reasons.  This centre left organisation has been seen as a mainstay of moderate or right wing or establishment Labour for decades.  Where those on the Corbyn wing of Labour may vilify Progress, the Fabians are seen as part of the party furniture and largely uncontroversial.  Indeed founded in 1884, the Fabian Society predates the formation of the Labour Party by decades.

In the 1950s and 1960s far from being a shadowy left wing group they acted for the Atlanticist right of Labour, advocating a pro US cold war foreign policy.  Pro nuclear figures like Gaitskell and Dennis Healy were notably Fabians and opposed by the left of Labour in often fierce polemical battles.

For the White Pendragons the Fabians are a virtually satanic group who aim to control society.  Part of a network of one world or new world order groups,  whose ultimate aim is the destruction of British society.

While advancing socialism the Fabians are part of a conspiracy staffed by an international banking elite.

The conspiracy thread in far right politics especially anti-semitic forms is disturbing and confusing.  The White Pendragon's objections to the Fabians, which seem to be a central part of their political world view, is incomprehensible to observers.  It is a standard on the British far right.

The first leader of the National Front, A.K.Chesterton, wrote an account of conspiracy entitled 'The New Unhappy Lords'.  The Bilderburgs, Rothschilds, Rockerfellers and, indeed, the Fabians, are part of a conspiracy to advance Soviet interests and destroy the British Empire.

The far right John Birch Society advanced related conspiracy theories in the USA during the 1950s and onwards.

The international far right have variously linked freemasons, socialist networks including the Fabians, bankers and Bilderburgs and the UN into a paranoid and mutating story of manipulation.

Typically a survey of the Australian far right in the 1970s noted:

In recent years Mr Butler has mellowed a little, and appears to have sought a more responsible image. But his League of Rights has continued to disseminate claims of a Communist conspiracy. One claim is that the Fabian Society and the London School of Economics are centres of operation for the International Jewish-Communist conspiracy. Mr Butler today claims that he no longer agrees with everything he has published—”Some of my best friends are Jews”, he has said. But his record speaks for itself. He has distributed anti-semitic and pro-fascist literature written by Sir Oswald Mosley, the British Fascist, and Lincoln Rockwell of the American Nazi Party

The American conspiracy theorist has always known that there were people out to destroy the paradise that was mythical America, land of the brave, home of the free. But they kept changing their minds about the identity of the evil conspirators. Was it the Catholics? The Masons? The Jews? The bankers? The East coast elite of 'old money'? Fabians? After 1917 they knew it was International Communism but they weren't sure if there was someone else behind the Red Menace. Some suspected that Communism was merely a front for international Jewry (weren't Marx and Engels Jews?). Sometimes all the suspects were amalgamated into one vast, muddled, fudge as in this early 1950s formulation in which the threat was a 'Fabian, Rhodes Scholar, Zionist, Pinko, Communist, New Deal, Fair Deal, Socialist-minded gang'.2

Stray facts are built into a comprehensive narrative. Hitler was another exponent and the far right wing conspiracy narrative can be traced back to Abbe Augustin Barruel's Mémoires pour servir à l'Histoire du Jacobinisme.  Barruel's views were described by Nesta Webster, whose books were read by an array of far rightists including the John Birch Society. 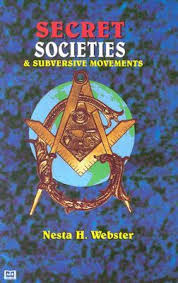 Such conspiracies cannot, of course, be convincingly refuted.  To challenge them shows that one is part of the conspiracy.

The thinking is that any revolution or unrest is a product not of injustice but of the plans of a manipulative external group.

By demonising a particular group violence is legitimated.  Thus the gallows is symbolically put forward by the White Pendragon as the solution to treachery.  The alien all powerful enemy is the big 'other' targeted by the conspiracy thinker.

The anti-conspiracy organisation see themselves as the knights of good fighting against superhuman evil forces.  Fear is linked to moral certainty, despite the seeming incoherence and opaqueness of their views.

Sadiq Khan's religion was not the main target for the White Pendragons, instead they were challenging the Fabian Society who they view as a bastion of evil rather than a rather mild political group committed to discussion and compromise!

I will blog something critical about the Fabians another day, I am largely ignorant of the 'freemen' on the land aspect of the White Pendragons but will discuss if I have time to find out.