Drop the charges against the Cardiff Castle Two! (occupy) 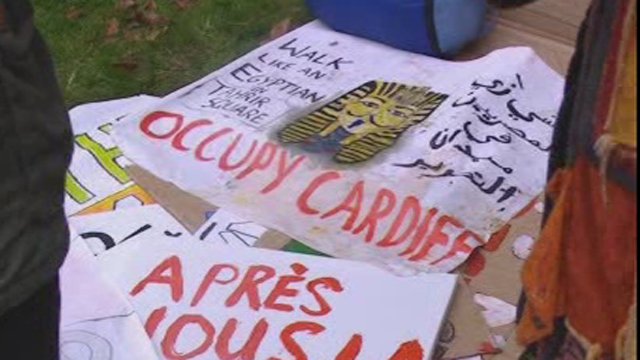 Had this from Adam, thanks amigo!

I was writing to ask if you might be willing to share and add your name to the petition we have been circulating - http://www.petitionbuzz.com/petitions/right2protest - in defence of the right to protest in Cardiff? We are hoping to get at least 500 signatories in the next week.


The matter relates to the South Wales Police/CPS decision to charge and prosecute two activists from Occupy Cardiff following the break up of a camp in the city centre - barely six-hours after it was set up!

Since the protest was situated on common-land (Cardiff Castle lawn - bequeathed to the people of Cardiff), the police sought to rely upon an arcane 'public-health' bye-law (pre-dating the bequest and, indeed, universal suffrage!). Having personally witnessed the heavy-handed police-action, I can only conclude that these charges are designed to justify the violence employed in breaking-up this peaceful camp.

While the camp subsequently found a home (care of PCS/Unite Wales offering sanctuary on the grass outside their offices), I am guessing that you will agree that prosecutions such as these can only serve to chill activity according perfectly with the ConDem’s 'public-order' agenda.

TEXT OF PETITION: We Support the Right to Peaceful Protest - Drop the charges against the Cardiff Castle Two!

On 11 November 2011 the police violently broke up a completely peaceful protest on the green outside Cardiff Castle by Occupy Cardiff (part of the world-wide Occupy movement against inequality and injustice in the financial system). They ‘kettled’ the demonstrators in a subway and arrested six people.

Eric Jinks and Jason Simons were charged under Section 61 of the Criminal Justice and Public Order Act with “failing to leave the land, namely CARDIFF CASTLE, as soon as reasonably practical”. They are due to appear at Cardiff Magistrates Court on Wednesday February 8th 2012 and if convicted face a maximum sentence of three months imprisonment.

The police action is an assault on everyone’s rights to express ourselves publicly and peacefully protest and is therefore a threat to the democratic rights of everyone in Wales. We call for the charges against Eric and Jason to be dropped, and for the Police to cease to use this legislation to restrict democratic protest