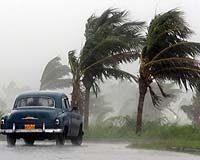 This from our friend in Havana and very sad to hear from Alan Woods and Liam Macuid that Celia Hart a veteran and follower of Trotsky has been killed in a car accident during recent hurricane activity.

We had hardly recovered from the emotional impact and material damages caused by the unexpectedly strong winds of hurricane Gustav on the Isla de la Juventud and Pinar del Rio, when news were received of sea floods caused by Hanna. Then, the worst news of all: that the very intense hurricane Ike, turning southwest under pressure from a strong anti-hurricane system located north of its course, would strike heavily over 625 miles throughout the national territory.

This means, in fact, that the entire country will be impacted by the three hurricanes; and some places will be hit twice.

The problems raised in the reflection which defined Gustav as a nuclear strike have multiplied. The principles guiding our behavior are still the same, just that much greater efforts will be required.

The Civil Defense did not miss a second. Comrades in positions of responsibilities in both the Party and the Government have been visiting every place. The cadres should demand discipline, withhold their emotions and exercise their authority. The responsibility for information falls on our media: television, radio and printed press.

The world has admired our people’s conduct under the scourge of Gustav. As our enemies cynically rubbed their hands with glee, our friends, who are obviously not few, are determined to cooperate with our people. The seeds of solidarity planted for many years are growing everywhere. Aircrafts from Russia and other countries have been flying in from thousands of miles away with products which cannot be measured for their volume or price but for their significance. We have received donations from small states like East Timor, and messages from important friendly nations like Russia, Vietnam, China and others expressing the willingness to cooperate as much as possible with the investment programs we shall soon undertake to reestablish and develop production.

The sister Bolivarian Republic of Venezuela, and its President Hugo Chavez, has adopted measures which constitute the most generous gesture of solidarity our homeland has known.
I think that despite the intensity of the blows received and of those still to come, our country is in a position to save the life of its citizens. The families shall be provided material assistance and food for as long as necessary until they recover --as soon as possible-- their capacity for food production. This assistance cannot be the same in every municipality since the damages are not the same neither is the time they will need to be back on their feet.

At this moment we are besieged by hurricanes. We should be more rational than ever and fight wastage, vagrancy and complacency. We should be absolutely honest avoiding demagoguery or compromising with weakness or opportunism. The revolutionary militants should set an example. They should give and receive confidence. They should give everything for the people, even their lives if need be.