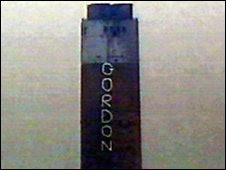 Wow the Greenpeace members who painted an anti-coal slogan 'Gordon - Bin it!' on the chimney at Kingsnorth power station have been cleared by Maidstone Court, here in the UK.

Wow...non violent direct action against cliamte change....we need a lot more of this.

NASA scientist called for a moratorium
During the trial, the world's leading climate scientist, James Hansen, came to court and challenged the government's plans for new coal, calling for Gordon Brown to announce a moratorium on all new coal-fired power plants without carbon capture and storage. The environmental policy adviser for the UK shadow Prime Minister said there was "a staggering mismatch between what we've heard from government and what we've seen from government in terms of policy".

An expert on climate change impacts in the UK said some of the property in immediate need of protection from sea level rises included parts of Kent (Kingsnorth being "extremely vulnerable") and that "it behoves us to act with urgency". And an Inuit leader told of his first hand experiences of the impacts of climate change.

After hearing all of the evidence, the jurors supported the right to take direct action to protect the climate from the burning of coal.

The Tipping Point
Seen in the light of the verdict, the plans to build a new coal plant at Kingsnorth (which could emit as much as the world's 30 least polluting countries combined every year for 40 or 50 years) show that Gordon Brown’s government is failing to act on climate change. Instead they are pumping out policies that are actively leading us in the wrong (and very dangerous) direction. UK Ministers now find themselves in a very tight corner.

This verdict marks a tipping point for the climate change movement. It stands as an example to governments everywhere and an inspiration to people world-wide that they can and should take a stand against coal fired power stations in defence of the climate!
at September 10, 2008

A bit off-topic, but I was after a decent resolution version of a pic you posted on an August 5 report on Socialist Unity, of a rally with a "no al carbon" banner.

It's to advertise a forum on "building eco-socialism", with Green Left Weekly's former Ven correspondent Kiraz Janicke, and Robyn Francis from the Cuba Australia Permaculture Exchange.

I'd be happy to pass on video of the discussion.

If this is possible you can send to: