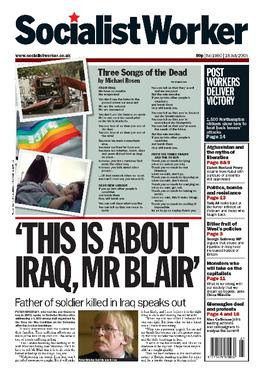 Have John Rees and Lindsey German been asked to step down from leadership of the Socialist Workers Party? I don't know.....had this from my Socialist Unity blog via a comment from David Broder.

Looks like the hottest bit of hot political gossip since the Gaunts House minutes were leaked....we shall see, who knows...be nice if John and Lindsay and other high up in the SWP could do the socialism with less top down control approach...we shall see.

oh by the way....no more principal speaker cos we have a leader...but I was elected on to Green Party International Committee topping the poll....so on with the lucha indigena...lucha ecosocialismo....new issue of Lucha Indigena out by the way, does it get sold Socialist Workers style in the rainforests?

John and Lindsey have been tireless members of the officers group and National Council since the inception of Respect. As National Secretary, John has provided consistent judgment and direction in the most difficult political circumstances, while Lindsey has been our inspirational Mayoral candidate in the GLA elections in both 2004 and 2008.

The National Council, at its meeting on 6th September, agreed a unanimous vote of thanks to John and Lindsey for everything they have done for our organisation. We are proud to have them as members of the Left Alternative and look forward to continuing to work with them in campaigns from Stop the War to the People before Profit Charter.

2. Troops out of Iraq and Afghanistan

It’s now less than two weeks until the Stop the War demonstration in Manchester and all Left Alternative members should be helping to make sure that it is as big a demonstration as possible.

The Left Alternative newsletter will be out this week by email, and we will also have a print-friendly version available on the website for downloading and printing for the coaches to Manchester. There will also be an A5 black and white leaflet for the demonstration, available shortly from the website: www.leftalternative.org.

Supporters of the People before Profit Charter are calling for lobbies of MPs in support of a windfall tax for energy companies, which are making multi-million pound profits while implementing huge price rises for ordinary people. If you haven?t already signed the Charter, go to www.peoplebeforeprofitcharter.googlepages.com and talk to contacts in your area to build a lobby of your MP. You can find out if your MP has signed a call for a windfall tax at http://www.compassonline.org.uk/campaigns/campaign.asp?n=2773.

Supporters of the Charter are also calling for protests at local Tescos when their profits are announced at the end of this month.

Finally, don’t forget to send the details of your Left Alternative events to the office so that we can publicise them on the website. You can email the office on office@leftalternative.org or ring 020 8983 9671.