Castro 'back the WWF not the IMF' 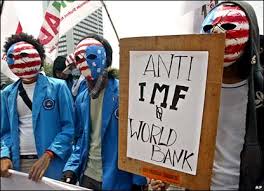 Great to see a nice report of the Green Party conference Cuba solidarity fringe in the latest Cuba Solidarity magazine and of course Roberto Perez was a great success. I am speaking at the Latin America 2008 Conference on 6th December at Congress House and looking forward to the 50th anniversary of the Cuban Revolution next year.

Any how this is good from Fidel, I know I get flack from some of you from posting him but I generally agree with him and feel that he produces very nice blog posts, his vision is the opposite of the traditional productivist approach of grind down mountains, destroy rivers and general fuck up nature one found in much 20th century socialism.

any way see what you think....

Today, I read that the US Federal Reserve had opened a new line of credit for the Central Banks of Mexico, Brazil, South Korea and Singapore.

The same report claimed that similar credits have been issued to the Central Banks of Australia, Canada, Denmark, the United Kingdom, Japan, New Zealand, Switzerland and the European Central Bank.

Based on these agreements, the Central Banks shall receive funds in exchange for hard currency reserves from these countries which have sustained considerable losses due to the trade and financial crisis.

This way the economic power of the US currency is asserted, a privilege granted at Bretton Woods.

The International Monetary Fund, which is the same people under a different name, has announced the release of high sums of money to its clients in Eastern Europe. Hungary will be receiving the equivalent of $20 billion euros; a large part of these are dollars coming from the United States. The machines keep minting bills and the IMF keeps granting its unfair loans.

On the other hand, the World Wild Fund stated in Geneva yesterday that at the present spending rate, by 2030 humanity will need the resources of two planets to keep up its life style.

The WWF is a serious institution. There is no need to be a University graduate of Mathematics, Economics or Political Sciences to understand what this means. It’s the worst choice. The developed capitalism hopes to continue plundering the world as if the world could still stand it.

Surely he could have chosen a slightly more radical environmental organisation than WWF? WWF even works very closely with the World Bank (on the World Bank/WWF Forest Partnership). WWF may well be a "serious organisation" - it's serious about taking money from corporations, for example - but it really isn't presenting an alternative to the current mess we are in.

Hi Chris,
well I think my tabloid headline is a bit misleading, obviously his point is not to endorse a group but to reject capitalist growth, by the way there is a very good Cuban environmental group which is run by Roberto Perez, take a look here http://www.fanj.org/

and of course I am very happy that he has made a strong break with non green forms of socialism...