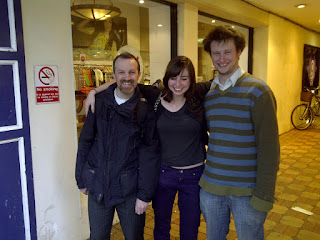 Emily and I went to help Adam Ramsay in Carfax ward, Oxford yesterday.  In the photo above Georgina Bavetta who is the Green Party candidate for NUS Bloc of 15 (her election address can be found here.)  Adam is well known for being a left Green and direct action activists with UK uncuts, just the kind of candidate we need to work to get elected.

The Lib Dems took the Carfax seat from the Green Party in 2010 when the world was full of Cleggmania, we are working to take it back.  Adam is an excellent candidate. Please get involved lots of volunteers are needed for canvassing and leafletting, the campaign is the centre of Oxford so easy to get involved. For more information https://www.facebook.com/pages/Adam-Ramsay-for-Carfax-vote-Green/260795210658508

Here s my interview with Adam.

How did you get involved in green politics?

I joined the party (well, the Scottish Green Party) in 2001 when I was 15 - I had always been interested in politics, and had been given Greg Palast and Joseph Stiglitz and George Monbiot for Christmas. I looked up the manifesto online and joined straight away. While I was a student at Edinburgh, Green MSP Mark Ballard took me under his wing, and I volunteered in his office in the Parliament for 3 years, helping organise for the 2005 G8 protests, write speeches, rin campaigns and so on. I ended up as president of my student union, and involved in numerous struggles from education to housing, global to hyper-local. And I was proud to find that, in (almost) every case, my party was on the right side.

Its fair to say you see green politics as left politics?

Yes. Green politics has to be about understanding that capitalism is an exploitative system and that we urgently need radical, democratic alternatives. That's obviously left wing. In the 20th century, the left ultimately lost. We need to learn lessons from those defeats and we need to build a left rooted not in disempowering beaurocracies, but in empowering radical democracy. For me, that's what Green politics is about.

You have been involved in direct action most obviously with uncuts action at Fortnum and Mason, do tell us more about this?

Direct action is one of the many tools we have at our disposal. Done right, it can be powerful - it can put an issue centre stage in a way few other things can. And that's what UK Uncut has done with tax dodging. Fortnum and Mason is just one of many UK Uncut actions that have taken place - the biggest being when 3000 of us blocked Westminster Bridge to protest against the Health and Social Care ('end of the NHS') bill. The difference with Fortnum and Mason was just that the police decided to arrest us. Most had charges dropped, but because I happened to facilitate a couple of the meetings inside, the Crown decided I must be an organiser. In a trial  in the Westminster Magistrates Court dominated by farce, I was found guilty and ordered to pay £1000 costs. But my fellow convics and I are appealing to the High Court, where we have a good chance of having the verdict overturned.

There is great disillusionment with party politics and many Green Parties have moved right, so why is the Green Party of England and Wales different?

Mass privatisation means the main decisions about our day to day lives are now primarily mediated not by democratic proesses, but by the market. Politicians once held many of the important levers of power in our economy - from rent controls to industrial strategy. These are now gripped by the stock exchange. Whatever MPs promise, they can't really change the facts which ultimately impact on peoples' day to day lives unless they are willing to change the system which has desmembered democracy.  At the same time, we've had an generation of what some call 'capitalist realism'. We have constantly been told that there is no alternative to that system. And so yes, people have become cynical about politicians' ability to change things. Green Parties are or are not different in so far as we are or are not willing to change that system - to strip corporations of those powers and to democratise them. Some Green parties around the world have always essentially been liberals with an environmental twist. They were conned by 'capitalist realism' and essentially called for some tweaks to the system as it was. I don't think it's so much that some Green Parties have moved right, it's that they've been subjected to harsher daylight. Throughout the era of capitalist realism the best we could do was point to a few problems. And Greens tend to agree on those - from poverty to the climate. Now that there is a much broader understanding that our system has been made - and that it has been made badly, and can be unmade then re-made, the debate has opened up. The questions have changed. And so those who lacked that systemic analysis have fallen behind. Most of the Green Party of England and Wales is different in that we have tended to be more willing to look at the structural problems of the global economy. And now that the economic collapse has laid these bare, we need to make sure that we strike while the iron is hot.

You are standing in Carfax ward, what are you chances?

Right across the Western world, people are voting for whichever party of the left is seen as the most viable alternative to the traditional social democrats: from Canada's NDP to the SNP to George Galloway. Greens should have a strong chance everywhere this year, if we put the work in and show that we represent people's frustration and that we are a credible alternative. That said, in Carfax, Greens came second last time. One of the streets I've been canvassing, Woodin's Way, is named after the former Green councillor for the ward - the late Mike Woodin. But the Lib Dems and Labour both seem to be targeting it too, and it'll be a tough race.

If you win you will unseat a Liberal Democrat councillor, are you gaining student votes from those who feel betrayed by the party on fees and cuts?

Yes. There's lots of students in the ward who are very cross with the Lib Dems. But many come from places where the Greens have no chance, so unless I can get to them, they are unlikely to vote for me - it'll all come down to the next few weeks of the campaign - and whether people come over to Oxford to help out.
at April 04, 2012

None of the above said...

High profile Greens seem to be well-off, well-educated and rather middle class. Just like every other fucker from Labour, Lib Dem and Tory etc telling me how to do it.

A person’s social background is not relevant. It is what they do with their future actions that they must be judged upon. In time they can be held accountable and given the chance to make a real difference.