From Fukushima to Hinkley Point 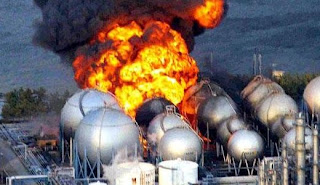 One of the pleasures of being elected as the Green Party of England and Wales International Coordinator is working with the members of our International Committee.  Interesting and creative people.  For example, Rebecca Johnson, a long term campaigner against nuclear power and weapons, is doing superb work.  She was one of the women peace campaigners at Greenham Common in the 1980s,  challenging cruise missiles.

Just back from Japan, she has written on the lessons for the green movement in the UK of the Fukushima disaster.


A week after getting back from Fukushima, I found myself talking with three women in Bristol who were handing out leaflets and urging people to take action to stop the building of the new Hinkley C nuclear power reactor in Somerset.  Their leaflet showed the evacuation zones if Hinkley were to suffer the kind of accident that caused fires and explosions at the Fukushima Dai-ichi nuclear power plant in March 2011.  Cardiff lies 20 miles away, across the Bristol Channel. Bristol is less than 35 miles away.  At those distances from Fukushima, Japanese families with young children or women of child-bearing age have been evacuated. I saw their homes and schools standing eerily empty, with rampant weeds choking the play equipment and pushing through broken windows and greenhouses.


I visited Fukushima together with doctors from Australia, India, Britain, Germany, Canada, Finland and the United States. We had earlier been in Hiroshima for a meeting of the International Physicians for the Prevention of Nuclear War. Our trip, which took a couple of hours by train and bus from Tokyo, was organised by a group of Japanese physicians (PANW), who had arranged for us to meet local doctors, farmers and politicians.


The fields, homes and roadside verges as the bus left Fukushima City were immaculately tidy, as expected in Japan.  This was the familiar rural landscape of Japan – pretty houses interspersed with fluorescent green rice paddies or dark green soya bean fields, with long greenhouse frames or poly-tunnels of tomatoes, peppers, cucumbers and other summer vegetables.


A few miles out of the city the scene suddenly changed. Gone were the tidy squares of rice and other crops. Instead, a riot of wild vegetation climbed up buildings and telegraph poles, obscuring the welcoming road signs with their waving cartoon characters.  Now the roads were practically empty of cars, though our bus passed a few police vehicles and heavy diggers. Like the boarded-up schools, some of the empty shops and houses still had gardens where bright flowers fought for space against the creeping weeds.  In fields and lining the roadside we saw rows of bulging sacks, which local doctors told us were filled with contaminated topsoil and vegetation awaiting collection for disposal as radioactive waste.
READ MORE OF REBECCA'S ARTICLE HERE