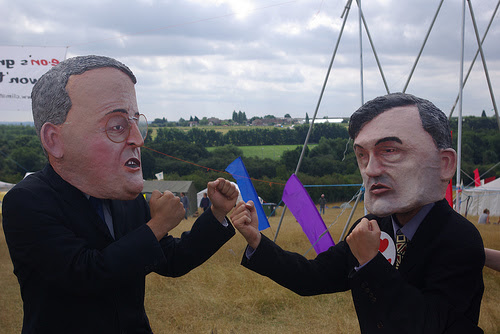 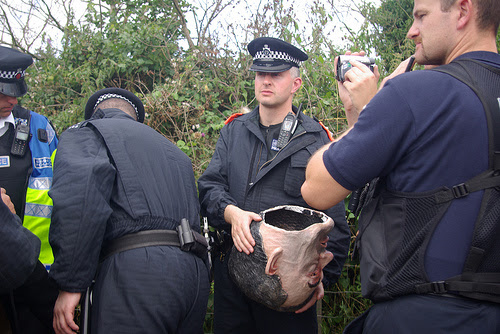 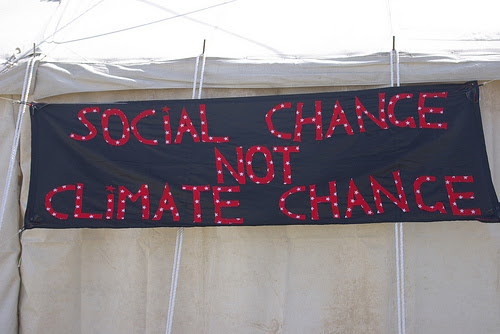 A magical evening at the climate camp. Most hilarious moment was surely the announcement that the student climate action cafe has hundreds of free condoms and nobody is taking them. Don't let anyone doubt the seriousness with which us campers treat stopping E.ON! Later there was a Latin America theme to entertainments, with live music, Bolivian dancers and DJ's until powerdown. The Bolivian dance troupe told us their story of fighting water privatisation right through to the election of Evo Morales, the first indigenous president of Bolivia. The key? We have to not just march or take action for a day, but for weeks and months at a time. Food for thought in terms of stopping Kingsnorth being built.


Climate Camp was fun when I visited yesterday. It is stunningly well organised and shows that living green and working with participatory ways of doing things works. Renewable energy and low impact living work. The atmosphere is great.

I talked at a Latin America workshop yesterday with Bolivian and Ecuadorian speakers, Andy Higginbottom from Colombia Solidarity http://www.colombiasolidarity.org.uk/ spoke as well. To get us in the mood the police helicopter regularly flew over our discussion tent, drowning our Andy's accounts of repression in Colombia. The earth is being despoiled to get hold of resources, a capitalist economy wastes them at dizzying rates and indigenous people and the environment are on the front line of the damage. The Latin American left in government across most of the continent have some awareness of the environmental problems inherent in this model but are still largely locked into an ‘extractive model’. However in most states there is now some break on mining but Colombia and Peru are clearly trying to maximise foreign mining investment and the people/environment bear the brunt of this.

It was a very wide ranging discussion, there was plenty of debate and disagreement but no intolerance, anarchists, greens, socialists, well just people talked and learnt and feedback. I think the inclusive culture here has a lot of say to the traditional left and those who like to have top down political change rather than participation. Nice to meet the guy who had been to barrio 23 in Caracas….

Anyway while I was blissed out by the camp, the policing was as we know over the top I got searched by scary men snapping their latex gloves, which unless you enjoy that kind of fun, is a little distressing…I didn’t see any one physically assault. Norman Baker MP nearly got pepper sprayed on Monday and the police regularly move against the camp.

There are over a 1,000 cops, the FIT are out in force, it is like a huge military exercise. Petty restriction is the name of the game, the shuttle bus for example was impounded yesterday, on trivial grounds. Everyone is searched. The rumour is that Gordon Brown has personally promised £3 million for the policing in a number 10 show of official strength.

To be honest, in my early 40s and 5ft 5 I look like Mike Tyson compared to many of the campers, police in riot gear threatening young women in flora dresses, is loco. One person told me that he had seen a cop with tears streaming down his face after one confrontation, I don’t know what the police have been told to encourage them but it is not exactly a threatening environment.

However non violent direct action is a threat to conventional power structures and hypocracy. The over reaction will produce a Gandhian gain. I am not especially an advocate of Gandhi but embarrassing an over the top opponent is clearly part of what he aimed for and is occurring at the camp. The police bill will haunt Brown I am sure of that.

Do visit. You can get a bus from Strood to Hoo St Werburgh, which is about ½ mile away they go regularly. Or cycle, although your bike lock will be impounded, so lock up somewhere secure away from the site. Or I reckon if you are fit it would take 1hr half to walk from Strood rail station.

Great to see the climate change showing the way in lots of ways. Don’t knock it, go along and try it.

‘
"This guide is published by the National Extremism Tactical Coordination Unit, AKA NETCU, and, as it states on the inside cover, is not to be released to the public - even under freedom of information requests" but was found by the climate camp and can be read here. http://www.indymedia.org.uk/en/2008/08/405393.html

More ‘single issue extremism’ as the feds might say another time.
at August 07, 2008

Good report Derek. I went along on Tuesday for the first time and share many of your observations.

I went on Sunday - did the march to Kingsnorth then thought I would pop along to the camp, just to visit for an hour or so, before going home. Police made it a complete ordeal to get in though, particularly if you had a bike you wanted to lock up. They weren't letting any d-locks on site - can kinda see why, so was happy to lock my bike up by the police compound, but they wouldn't let us do that either, so we took our bikes about half a mile away and tried to lock them to a road sign but the police came along and said if we leave them there they would remove them. OK, I said, shall I just leave the lock here and take my bike on site with me, but they wouldn't have that either. They really weren't geared up for people arriving on bikes and wanting to leave them somewhere secure. In the end I think I just wore down the police officer who searched me and he relented and let me lock my bike to a fence, while the person I was with hid his lock in a hedge and retrieved it later. Pictures on Indymedia show the police removing bikes - clearly us cyclists are a big terrorist threat.

Anyway, Kent Police have inspired me to go back to the camp tomorrow, but probably without my bike as I don't trust the police not to nick it! Oh well, will have lots to moan about at the next meeting of the Safer Neighbourhood Panel I sit on, plus a bit more of an insight into how individuals regularly singled out for stop and search feel.