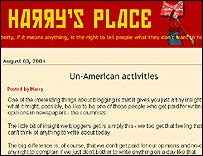 lets be honest much of the stuff on Harry's place I disagree with however that is not the point.

I am horrified by the fact that a legal threat is being made to shut the blog down and I think it is important to spread the word and give a bit of solidarity.

My friend Phil over at Socialist Unity takes up the story:


Never in a million years did I think such a title would appear on this blog, especially considering the “history” me and “Harry” had way, way back in the early years of the UK Left Network. But now I feel compelled to stand with Harry’s Place.

HP is under attack - and not for the first time. The (hopefully) temporary stand-in while HP is off the air takes up the story:

Harry’s Place may be removed (or rather have it’s DNS disabled) after a ‘complaint’ to the company that our domain name is registered with. We assume after threats were made on the weekend that this ‘complaint’ originates from Jenna Delich or her supporters. Though we have not yet seen the complaint submitted, we assume it runs along the lines that pointing out that Ms Delich linked to the website of a known neo-Nazi figure and former Ku Klux Klan leader is defamatory. This is extraordinary since Ms Delich has not denied that she circulated links to David Dukes website. There would be no point since the evidence is in the public domain. Nevertheless, a malicious complaint has been made to the company hosting our DNS.

Personally, I have very little time for the politics peddled on HP. Warmed over social democracy plus humanitarian imperialism plus trenchant Zionism do not suit my radical palate. But they have as much right to push their rubbish politics as any other blogger, regardless of how distasteful they can be at times. So down with the complaints, the writs and the threats of court action, and away with those of censorious intent. If you’re stupid enough to make the kind of mistake Jenna Delich did, then you should take the blowback on the chin, not scrabble around for a lawyer’s letter.

In the immortal words of the HP masthead: “Liberty, if it means anything, is the right to tell people what they don’t want to hear”.

Derek, it is very much to your credit that you are taking this stance. This issue appears to be becoming a line in the sand within the left.

I'm in no rush to pass judgement here, especially as we've only heard one side's version of the story. I have never heard of the complainant, Jenna Delich, and consequently I know nothing of her politics, her associations or her personality.

However, I am familiar with the Harry's Place website and their smear tactics against individuals on the left. HP works on the basis of '6 degrees of separation', i.e. how many handshakes is person X (this could be a left wing MP, a president, or just an ordinary person) away from the Big Bad Dictators.

Countless public and private figures on the left have been subjected to these unwarranted attacks from Harry's Place. These tactics are themselves a form of censorship.

Without knowing the precise details of the current incident (and I'm not that interested, really), I am unable to say whether Ms Delich has either an actionable case or indeed any sort of a case.

What I do know is that expressing solidarity with those whose stock in trade is smearing individuals on the left, is not something that should be done without a full examination of the both the facts and the context. There is more to this than a free speech issue.

If Harry's Place has libelled someone it should be shut down. Too many bloggers think they can hurl abusive and defamatory insults at individuals and get away with it. This is not a free speech issue.

I certainly can see why people might want to take pause, I have been labelled an anti-semite by opponents of an academic boycott and I know there is all sorts three removed spurious linking going on to defame those opposed to Israel's policy in the Gaza.

However my understanding is this is about a UCU member linking to David Duke....David Duke is a former Klansman and very much on the far right.

I don't think anyone on the Left should feel solidarity with the trolls at HP.

As you know, I have great respect for you and I am no great fan of the SWP. But on this occassion I have to say that their analysis (in Lenin's Tomb) is more far more compelling than yours.

You speak about your "understanding" of what transpired, not about hard facts. In my view, that is not a sufficiently solid basis on which to express solidarity with what Lenin's Tomb accurately describe as the 'HP smear machine'.

Put yourself in the position of the complainant, and consider her version of events. You post a link to an article about Palestine that appears on a website, but was not written by that website or for that website, and is not obviously anti-Semetic. Later, you discover that the website you linked to is in fact a far right hate site. You turn a deep shade of red and apologise for any unintended offence caused.

That should have been the end of the matter. Except that your embarrassing gaffe is then seized upon by Harry's Place, who in their time honoured fashion, proceed to paint you as some sort of anti-Semetic Nazi who gets their information from the KKK.

A photgraph of you is posted together with the caption "Sheffied-based academic - links to far right websites associated with the Ku Klux Klan". "Links to [the] far right" eh? Hmm.. well you could take that in more than one way, which I suppose was the whole point of the ambiguous phraseology.

Well, I guess you'd be mightilly pissed off, especially if your professional reputation and even possibly your career might be adversely affected by being smeared with the Nazi tag. I know I would be. And so you make a complaint to HP's website host, on the grounds that HP has breached the host's terms of use.

To the extent that there's a free speech issue here, it would seem to be an issue of HP using their blog to smear and demonise their opponents in order to... yes... stifle debate and free speech.

If the complainant's version is broadly accurate, then I would suggest that you should be expressing solidarity with her, not with those who set out to smear her, and have a track record of doing the same to countless other individuals.

At the very least, I think you have responsibility to properly check the facts before rushing to judgement.

I agree with Calvin Tucker. I think your post was impulsive and showed poor judgement. What is the point of commenting on something when you don't know the facts? 'Harry's Place' is a website for imperialists, Zionists and trolls. They don't deserve your solidarity.

Yes I have been on the receiving end of accusations of being an anti-semite...

Yes all this fuss is keeping us from campaigning on Gaza.

however I may be wrong but I think linking to David Duke is wrong and I think closing down blogs is wrong.

as you know I am a UCU member although and pro-boycott....so comrades we may have to agree to differ.

Yes, but nobody is suggesting that linking to David Duke's website is anything other than wrong.

Jenna Delich posted a link to an article that had been republished on Duke's website, i.e. the article was not written by Duke or for Duke. She did not post a link to the Duke website itself, i.e. the home page, or endorse the site in any way.

Further, Delich says that she had no idea who David Duke was, did not check out his website, and is horrified to discover that she inadvertantly posted a link to his racist publication. She has also apologised.

So unless it can be established that Delich has a track record of support for far right racist groups in the USA, the only rational conclusion to be drawn is that Delich is telling the truth and made a mistake. A mistake for which, as I pointed out earlier, she has already apologised.

Harry's Place knew all this, but that did not get in the way of them doing what they love to do, and that is trying to destroy the personal reputations of public and private individuals on the left

And so they embarked on a campaign of smears and inuendo which sought to twist an obviously innocent mistake into evidence of Delich's supposed anti-Semetism and fascism.

Headlined 'UCU and the David Duke Fan', the Harry's Place article carried a photgrapgh of Delich together with the caption: "Sheffied-based academic - links to far right websites associated with the Ku Klux Klan". The inference to be drawn from the caption is that Delich has links to the far right.

Harry's Place knew exactly what they were doing. They were following their tried and tested methodolgy of taking a set of unconnected facts and connecting them together in a way that suggests that their political opponents are all Nazis.

Individuals who are smeared in this way can face serious consequences. In Delich's case she has apparently received hate mail and death threats. And according to Lenin's Tomb, her employment may be threatened.

And so Delich complained to the ISP that hosted Harry's Place, and the ISP took down Harry's Place on the grounds that they had breached their terms of use.

Um... so how exactly is this a free speech issue? Website hosts are free to host or not host whomever they like. They are free to impose 'terms of use' or to have no terms of use. Harry's Place have no migrated to a new host, who doesn't care what they post.

No. What this is, is a witch hunt against Delich, conducted against her because Harry's Place wish to intimidate her and anyone else from speaking up against the policies persued by the Israeli Government.

Harry's Place are masters at twisting the facts to present themselves as the victims of censorship, and the champions of free speech. The truth, I contend, is the very reverse.