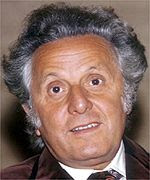 Very sad to hear about the death of Leo Abse, 'My partner's father, Leo Abse, died last night. He passed peacefully away
in his sleep at the age of 91, so it could have been a lot worse', according to Jane Ennis, who emailed us just now. He was a Labour MP who created some big and positive changes. The one positive bit of the Blair regime was constitutional change that produced PR for some elections, the Welsh Assembly, the Scottish Parliament, London Mayor, etc. The big achievement of the Attlee government was the welfare state and particularly the NHS.

Wilson's government in the 1960s produced a sexual revolution but it was driven by Leo who created the bill that legalised homosexuality and back bench MPs.

I run into to Toby Abse his son, his partner Jane is one of my comrades in the Green Party and Green left.

Toby teaches at Goldsmiths, where I am a visiting lecturer and he is a stalwart of the Ecosocialist International, Jane and Toby, myself and my partner Sarah enjoyed getting together in Paris last year for a meal mid way through the discussions.

I run into Toby at lots of green leftish events.

I have never met Leo, I get the impression that he was a solid Labour MP for many years and I think I am right in saying he was a bit of Freudian and wrote numerous books.