J.G.Ballard maps the desert of the real 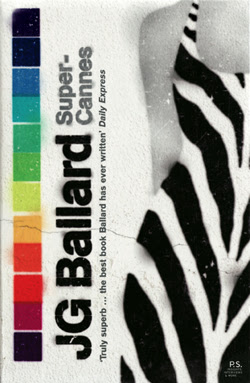 "could consumerism turn into fascism? The underlying psychologies aren't all that far removed from one another. If you go into a huge shopping mall and you're looking down the parade, it's the same theatrical aspect: these disciplined ranks of merchandise, all glittering like fascist uniforms. When you enter a mall, you are taking part in a ceremony of affirmation, which you endorse just by your presence." Consumerism "has to a large extent replaced art and culture in this country."

Initially it was close, I felt, to self parody. The plot is very similar to his earlier Cocaine Nights and it reads at times as if it is being narrated by some louche English cliche.

Nigel Farage on speed and acid.

My feeling is one of desperation after reading it to the very end.

Ballard once argued that far from being a science fiction writer, he was an enlightened futurist, trying to show what was just over the horizon of the present, 'sent on ahead to see if the water is drinkable'.

He is no friend of the green movement, several bitter asides suggested for him Green is a form of pathology.

The book suggests that corporations rule the Earth. Human beings are worn like a set of clothes by the prevailing relations of production.

Even those in control are puppets.

To make the puppets feel that they are alive and have agency, random acts of atavistic violence are organised by other puppets.

Grim, accurate, nasty. The water does not taste too good.

Chimes with many of the insights of Zizek, a sophisticated left reading of fascism.

The soft fascism of Berlusconi is Zizek suggests likely to become the norm in democracies where we are controlled by idiots.