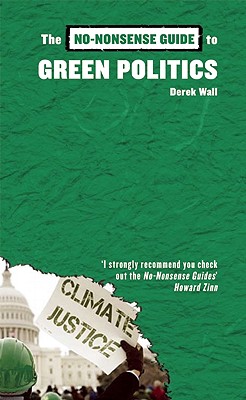 My No Nonsense Guide to Green Politics is now on sale, you can get it from New Internationalist or good book shops or Amazon.

Here is the Foreward from Nandor, a former New Zealand MP and a good friend, see what you think.

The agenda of the international green movement will
dominate the next century, as the demands of the
labor movement (and the responses of capitalism to
them) dominated the last. What that agenda is, its
boundaries and dynamics, remains fluid although its
broad thrust is clear. In this book Derek Wall sets
out the foundations of green philosophy as it has
spontaneously developed in various places around the
world, as well as articulating the major points of debate
and disagreement. In doing so, he has made green
political ideas more accessible and understandable to
a general audience

Importantly, Derek does not shy away from the
most contentious arguments that have riven some
green organizations. The question of whether green
politics is left politics has caused considerable tension
at times and continues to resurface in Green parties
to this day. The nature of the state and how far
green solutions rely on empowering the nation-state
is also fiercely debated in a movement that has
brought together a number of divergent strands of
activists, from unionists to anarchists to first nations.
Finally, the question of whether the international
structures of global capitalism, such as the World
Trade Organization and the World Bank, can be
reformed or need to be replaced has been a crucial
point of difference in international green forums. The
same question, of course, can be applied to corporate
capitalism itself.

Derek Wall is well placed to write such a book. He
has played a number of important roles in the Green
Party of England and Wales and continues to stand
in general elections. He is involved in campaigning
on a number of green issues, and is active in the
ongoing debates that continue to shape the green
movement worldwide. He brings a well-informed and
critical analysis to the project, making this a valuable
contribution to the green library.
Nándor Tánczos,
former Green Party MP in
New Zealand/Aotearoa
at September 01, 2010

Just to let you know, you have at least one vote to be Deputy Leader. Will also be spurning A Journey to read your latest book.

thanks! It all helps, seriously running for deputy and getting the books out, should at least get the news out about important stuff from Elinor Ostrom's good work to all the impressive campaigning of people like the Aidesep network deep in the Amazon rainforests.