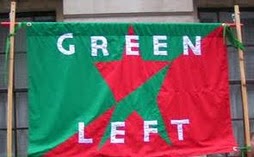 Very pleased to have this invite to address the Unite Summer School in Belfast.

I am trying to stick to my no fly rule, so its train and ferry there and back, so less blogging from me for the next day or two!

Here is a biog of Jim Brown, proud to be doing the first of what will be a series of annual events in his memory.

And of course its 'green left alternatives' so not based on one political organisation but thought the GL banner would be appropriate for this post!

That was how the rural trade unionist and socialist, Jim Brown from Lisbellaw , Co. Fermanagh, Northern Ireland was described in a book published by Marian Hyndman about activists from the unionist/loyalist community in Northern Ireland who dared to be different (Journeys from a Protestant Past)

Jim was born in 1924 in the village of Lisbellaw into a working class family. He didn't get a lot of schooling and took a jaundiced view of Sunday school when on an an outing to the seaside sponsored by the Sunday school he was refused a paris bun and a cup of tea because he hadn't attended enough Sundays. Jim attended a lot less after that experience.

Jim's early working life was as an agricultural labourer who was hired out to local farmers because he a strong young fellow. As a hired labourer he seen the injustice of a system which worked him day and night with not a lot of food or decent shelter and often refused to pay the 6 months pittance due on the flimsiest of excuses.

That was the experience of the young man who although underage joined one of the Scottish regiments of the British army at the outset of the Second World War. He fought fascism in the deserts of North Africa and the beaches of Dunkirk where he seen friends blown to piece beside him . That experience gave Jim a live long hatred of viloence, sectarianism and fascism. It was also in the war that Jim developed a lide long interest in socialist politics when his commanding officer ( A Lieutenant Sinclair from Aberdeen) gave him the Ragged Trousered Philiantrophist to read in the North African desert.

Jim demobbed in Bristol where he met the veteran comunist, Betty Sinclair and began to sell the Daily Worker on the streets of Bristol. At the time Jim seen no future in Northern Ireland and only returned because his mother took seriously ill. While home he met his future wife Margaret and settled in his home village of Lisbellaw.

Jim was not however for settling when it come to the class issue and got himself involved in local trade union struggles, he had joined the Transport and General Workers Union in 1945. Jim who worked as a Carter went to become the local Branch Secretary of the T&G branch and the Chairperson of the local Fermanagh Council of Trades Unions. At various times he was also a member of the Communist Party and the Northern Ireland Labour Party. Wherever there was a workers struggle Jim was there cheering them on whether at the Woolen Mills of Henderson/Eaddie in his native Lisbellaw or when he became a member of the Civil Rights Movement in 1969.

Jim always encouraged rurual workers to organise and fight for their rights. Nothing annoyed him more than the violence and oppression which engulfed his community for so many years. When the ceasfires came and the dispensation of the Good Friday agreement was negotiated. Jim, although he knew it wasn't going to solve our problems, was four square behind political conciliation and at that time in particular the Women's Coalition.

Jim always argued that the long term answer to our problems in Northern Ireland and beyond was the development of class politics. He was never afraid to promote that argument whether locally or on the Regional Committee or National Trade Groups of the union on which he sat. Undoubtedly Jim would have had double contempt for this Government because while he had not time for Tories he had even more contempt for what he called the “wrotten middle class” of the Liberal Party .

Jim died in 2003 but he would have been delighted that the union he loved was sponsoring a political debate which would advocate liberating the class he loved, “The Working Class”.

Was honoured to be present at the first Jim Brown Debate and it was a pleasure to listen to your views on the green left alternatives.

thanks for your kind words Wayne, I was just blogging Greg's report of the event, it was lovely to be over and I was impressed by the high level of discussion from participants!