How they learnt to riot and burn? 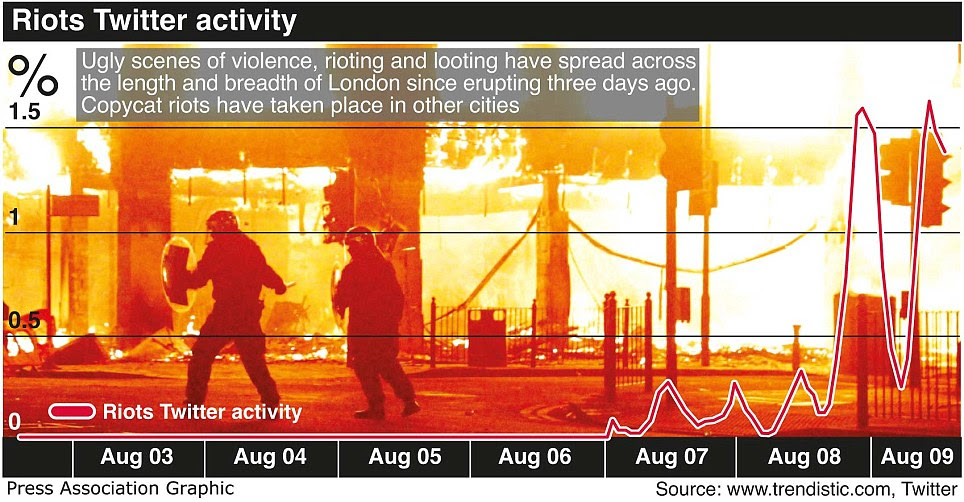 I was on the train listening to feral youth, trainee bankers smug as they talked about stealing from us, stealing big style is the socially accepted norm, cops taking bungs from Murdoch to turn a blind eye to phone hacking, city hacks, rioters....its a system which does not even disguise the greed. Can we move from a society based on burn, steal and batter? We have to.

“Nihilistic and feral teenagers” the Daily Mail called them: the crazy youths from all walks of life who raced around the streets mindlessly and desperately hurling bricks, stones and bottles at the cops while looting here and setting bonfires there, leading the authorities on a merry chase of catch-as-catch-can as they tweeted their way from one strategic target to another.

The word “feral” pulled me up short. It reminded me of how the communards in Paris in 1871 were depicted as wild animals, as hyenas, that deserved to be (and often were) summarily executed in the name of the sanctity of private property, morality, religion, and the family. But then the word conjured up another association: Tony Blair attacking the “feral media,” having for so long been comfortably lodged in the left pocket of Rupert Murdoch only later to be substituted as Murdoch reached into his right pocket to pluck out David Cameron.

There will of course be the usual hysterical debate between those prone to view the riots as a matter of pure, unbridled and inexcusable criminality, and those anxious to contextualize events against a background of bad policing; continuing racism and unjustified persecution of youths and minorities; mass unemployment of the young; burgeoning social deprivation; and a mindless politics of austerity that has nothing to do with economics and everything to do with the perpetuation and consolidation of personal wealth and power. Some may even get around to condemning the meaningless and alienating qualities of so many jobs and so much of daily life in the midst of immense but unevenly distributed potentiality for human flourishing.

If we are lucky, we will have commissions and reports to say all over again what was said of Brixton and Toxteth in the Thatcher years. I say ‘lucky’ because the feral instincts of the current Prime Minister seem more attuned to turn on the water cannons, to call in the tear gas brigade and use the rubber bullets while pontificating unctuously about the loss of moral compass, the decline of civility and the sad deterioration of family values and discipline among errant youths.

But the problem is that we live in a society where capitalism itself has become rampantly feral. Feral politicians cheat on their expenses, feral bankers plunder the public purse for all its worth, CEOs, hedge fund operators and private equity geniuses loot the world of wealth, telephone and credit card companies load mysterious charges on everyone’s bills, shopkeepers price gouge, and, at the drop of a hat swindlers and scam artists get to practice three-card monte right up into the highest echelons of the corporate and political world.

A political economy of mass dispossession, of predatory practices to the point of daylight robbery, particularly of the poor and the vulnerable, the unsophisticated and the legally unprotected, has become the order of the day. Does anyone believe it is possible to find an honest capitalist, an honest banker, an honest politician, an honest shopkeeper or an honest police commisioner any more? Yes, they do exist. But only as a minority that everyone else regards as stupid. Get smart. Get Easy Profits. Defraud and steal! The odds of getting caught are low. And in any case there are plenty of ways to shield personal wealth from the costs of corporate malfeasance.

What I say may sound shocking. Most of us don’t see it because we don’t want to. Certainly no politician dare say it and the press would only print it to heap scorn upon the sayer. But my guess is that every street rioter knows exactly what I mean. They are only doing what everyone else is doing, though in a different way – more blatently and visibly in the streets. Thatcherism unchained the feral instincts of capitalism (the “animal spirits” of the entreprenuer they coyly named it) and nothing has transpired to curb them since. Slash and burn is now openly the motto of the ruling classes pretty much everywhere.

This is the new normal in which we live. This is what the next grand commission of enquiry should address. Everyone, not just the rioters, should be held to account. Feral capitalism should be put on trial for crimes against humanity as well as for crimes against nature.

Sadly, this is what these mindless rioters cannot see or demand. Everything conspires to prevent us from seeing and demanding it also. This is why political power so hastily dons the robes of superior morality and unctuous reason so that no one might see it as so nakedly corrupt and stupidly irrational.

But there are various glimmers of hope and Light around the world. The indignados movements in Spain and Greece, the revolutionary impulses in Latin America, the peasant movements in Asia, are all beginning to see through the vast scam that a predatory and feral global capitalism has unleashed upon the world. What will it take for the rest of us to see and act upon it? How can we begin all over again? What direction should we take? The answers are not easy. But one thing we do know for certain: we can only get to the right answers by asking the right questions.

—
David Harvey is Distinguished Professor at the Graduate Center of the City University of New York. His latest book is The Enigma of Capital, and the Crises of Capitalism.
at August 12, 2011

Couldn't agree more. It is the elephant in the room. Nobody in government (or yesterday on Question time) dares to mention it, but it is on many people's minds.
The Feral Elite, condoned by the government, the unaccountable and unelected financial markets, with governments from all directions panting to do their bidding, are doing as much looting and robbing as the 'feral underclass'.
The Social Contract is breaking down, at the top as well as at the bottom, and if that happens, we will all revert to the law of the jungle.

Ok, but a point of disagreement: Animalizing Capitalism instead of animalizing the rioters still wholly repeats various assumptions about animality and the human. For example, you assume that to be animal is to be selfish, out of control etc. This repeats the historical dualistic baggage of these terms. The real message to take from the animalization of the rioters is that 'animalization' has consistently been used to represent otherness and disorder, and to simultaneously construct an arbitrary idea of the 'human'. This is gendered, classed and racialised. And this is still a problem for Marxism, this naturalization of the human. Deconstructing human/animal dualism remains an important task for critical *intersectional* politics.

Excellent point, although Marx was big on how humanity was part of nature but equally was not big on animal cruelty issues!

What a brilliant analysis!

The riots are about everything I dislike in society.

How incisive. And how tragically predictable.

However, it totally and absolutely ignores the demographics of the rioting as that would completely undermine the theory. The real underlying causes will be many and complex and deserve a thorough analysis. I suspect a breakdown of traditional structres may be at play, hence the involvement of the (mainly black) underclass in the south and the (mainly white) underclass in the north. However, quite why so many very poor white and Asian communities in the north especially didn't riot is baffling - maybe those traditional working class ties and those Asian family structure are not as broken as they are in London and Birmingham? And why were 95% of them male if it's economic and socially derived? I may be horrendously wrong but I hope I have the humility and intelligence to know that that is the case.

We need to have the common sense to step back and realise we can't, and shouldn't, fit these things to what we want to believe.

thanks for posting this article, Derek

we needs voices of sanity!

surprised you haven't mentioned that Mark Duggan was a nephew of this cunt: