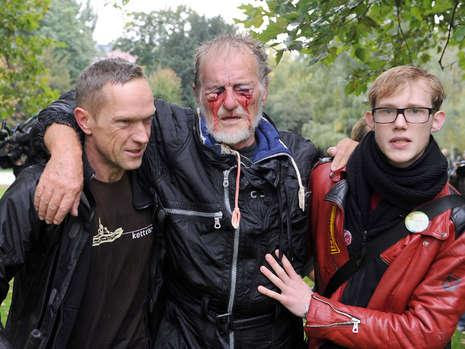 I get the impression that 98% of the population want water cannons, horrendous but understandalbe, this is worth reading and the horrifying video is instructive....and I have pasted in one of Jenny Jones statement which is important. A cycle of violence looks increasingly likely in the UK as the jilted generation meets alienation with looting and they in turn face more repression...sour times.

Public opinion on this will probably be under the belief that this just means getting protesters a bit cold and wet so they go home. We must be clear that the use of water cannons is brutal and dangerous, and can result in the following:

This man had his eyes ripped out by a water cannon (see picture above) in the protests in Stuttgart against the construction of the Stuttgart 21 train station. The image is taken from Der Spiegel, and has done the rounds in Germany, but is not well-known here in Britain. It is vitally important that we spread good information on the dangers of water cannon use as quickly as possible. Please link to this post wherever you can, retweet it, link to it on facebook, etc. This way we can build a campaign against this tactic.

FROM THE TRUTH ABOUT WATER CANNONS

"Water cannon causes injuries to the eyes and brain, as well as bruising to internal organs.

"Water cannon have restricted manoeuvrability, so they would not be very useful against mobile groups in narrow city centre streets or estate lanes.

"And when you have a machine that requires 4000 gallons every 4 minutes, it needs constant refilling.

"In contrast, we've seen a massive increase in police presence on the streets of London on Tuesday night, leading to more order and security.

"We should be asking why the police didn't respond sooner and nip the looting in the bud on Saturday night, at the Wood Green and Tottenham Hale shopping centres.

"We had copy cat looting, with the destruction of businesses and livelihoods, because young people felt they could get away with it.

"We need an urgent review of police tactics, not a whole new armoury.

"We have to avoid a US approach of criminalising entire communities and using paramilitary policing on young minority men.

"We need to think about younger children who may be vulnerable to getting caught up in gang violence.

"And we need to create a society where youth are not so extremely alienated in the first place."