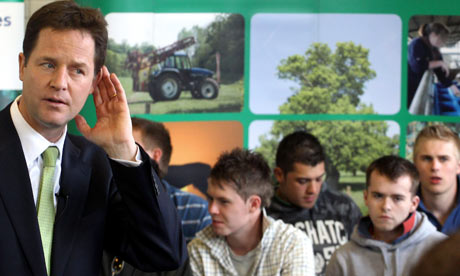 There is an interesting account from a Liberal Democrat student blogger of the protests at Millibank last week:

I’d missed the initial gathering of my fellow Lib Dems at Trafalgar Square so as
soon as I got off the bus, and had said hello to my local (LD) councillor
who
had come up separately, I made my way past the various university
contingents,
homemade placard clutched in my hand, as I tried to find the
other Lib Dems.

Having made my way from the rear of the protest to the
front and then on
to Trafalgar Square, I was certain of two things. One,
with my Lib Dem t-shirt,
rosette and placard I felt highly conspicuous and
vulnerable. Two, the Lib Dem
group was nowhere to be seen and the SWP seemed
to have newspaper salesmen
everywhere.

Doubling back towards the
rear of the protest, and
frantically texting people who I knew would be
there, I suddenly found myself
hailed by the large friendly, unstoppable
force of liberalism that is Martin
Shapland, Chair of Liberal Youth. After
scrambling over a railing and around
some NUS stewards, I joined Martin and
the rest of the Lib Dem contingent. Sadly
we were relatively few (I counted
thirteen of us at the start of the march) but
there were enough placards and
signs for three apiece whilst we bemoaned the
fact that most Lib Dems who’d
said they were coming seemed to have decided to
march with their
universities or to stay home.

It gets even more bizarre.

As we headed back past Millbank it became obvious that the situation was getting
worse. A police van was parked in the middle of the road while more windows had
been smashed and someone was setting of fireworks. Unsure of what was being
burned but certain that we would be unpopular with the protesters inside the
courtyard, we decided to go past as quickly as we could – stopping only to gawp
at the spectacle of a nearly naked man lying on a sledge being towed along by
other similarly near naked men, one of whom was wearing what appeared to be an
animal skin. A Druid friend of mine who was standing nearby reliably informed us
that they were Satanists.

We only have a right wing government committed to huge cuts in corporation tax combined with misery for the rest of us because of the Liberal Democrats.

While I am encouraged that Liberal Democrat student protesters are chanting “Nick Clegg shame on you, shame on you for turning blue”, perhaps they should be taking stronger action.

Next week the Education Action Network will be occupying the Liberal Democrat headquarters, I hope that the Liberal Students will access Cowley Street with their membership cards before burning them on the roof.

Will this happen? Watch this space.

Surely the issue is individual Liberal Democrat MPs not honouring the pledge to vote against any increase in tuition fees. Any action should be aimed at them - not the party as a whole. Should people who have an issue with OPT policies occupy GPEW HQ? The Liberal Democrat membership has shown it’s position by voting for Tim Fallon MP as president (Tim standing on a platform of honouring the pledge), electing pledge-honouring Cambridge MP Julian Huppert, former Oxford West and Abingdon MP Evan Harris to the Federal Policy Committee. With both former leaders Charlie Kennedy and Ming Campbell saying they will honour the pledge.

Burning your membership card/Resigning is absolutely not the way to defeat Clegg. You do that by remaining in the party and fighting for what you believe.

You are just fodder, I don't think you will be allowed any say.

The current government are wrecking Britain and they are only in power because of the Lib Dems.

Tim Fallon, so what?

Well it's my party, and I'm going to fight for its soul.

It wasn't just individual Lib Dem MPs who approved the deal to get into bed with the Tories: it was the party as a whole. Until the party as a whole votes at conference to withdraw its MPs from the coalition in protest at the Tories' cuts agenda, it looks as if the Lib Dems mainly believe in being in power, whatever the cost to them or the country. Is that what you believe in?