Laurie Penny, Tommy Sheridan and the continuing failure of the left 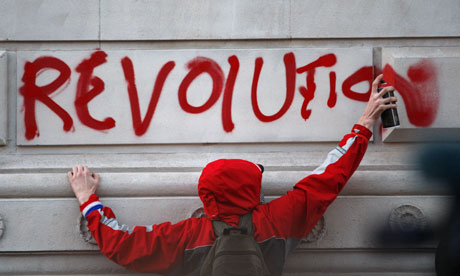 The Con Dem government are slicing and dicing the welfare state, Murdoch's media control is accelerating, ecological catastrophe beckons and the financial system has failed .We need a left that can gain enough strength to pull the brakes and stop the train leaping into the abyss.

However an effective left looks further away than ever. Attempts to build a left alternative to the Labour Party such as the Scottish Socialist Party and Socialist Alliance have failed. In England only the Greens and Respect have made gains and these have been modest and local.

The argument that there is no electoral alternative outside the Labour Party seems over whelming, yet there is no place for the left in Labour either. The Party is top down, undemocratic and more responsive to oligarchs than bus drivers. The failure of the inspiring John McDonnell to get on the ballot paper for Labour leader, tells us everything we need to know about the possibility of moving the Party left.

Politics, at least, in England and Wales, is apparently blocked for the left.


Laurie Penny, inspired by the new and youthful protest movement hitting the streets, has argued that we can by-pass parliament and directly effect change. :

'this movement is daring to do what no union or political party has yet contemplated – directly challenging the banks and business owners who caused this crisis.'

Yet the Con Dem government will continue to hold power and in doing so will do everything possible to reduce the capacity of the left. Massive cuts in education will mean that students will be forced to work harder, borrow more and reject degrees in subjects like the arts and politics, thus the ability of youth to protest will be eroded. The job cuts of the Con Dem government will complete Mrs Thatcher's task of destroying the trade unions.

Tommy Sheridan's party the Scottish Socialists briefly acted as a voice for the social movement on the streets, at the time working class opposition to the poll tax, elected members of parliament and briefly helped change things in a left direction. While Sheridan's case is complex and I for one have close friends on both sides of the argument, there is no doubt that the kind of change Laurie Penny seeks has been made less possible by the destruction of the Scottish Socialist Party.

As a member of the Green Party I worked hard to elect Caroline Lucas and even took Tommy Sheridan's former press officer Hugh Kerr down to Brighton to pound the streets. However one Green Party MP, even one as inspiring as Caroline, is not enough.

Laurie Penny is right to be excited but we are still a long way from a strategy for change.
at December 28, 2010

Having read this entry through I see that it highlights some problems that 'the left' are facing, all well and good, but they don't seem to propose any solution whatsoever.

Except possibly 'more Green MPs' floating beneath the surface of the comments about Caroline Lucas. Perhaps you wish to insinuate that your party should be classed as one of these 'new political parties' that will take power.

Forgive me, but compared to the scale of problems we are facing, which run deep into the very fabric of our wealth-obsessed culture, this doesn't exactly sound like a particularly innovative response- stick to conventional power structures, the one's that are repeatedly shown to hammer out a political orthodoxy that keeps things as inert as possible- to the benefit of the ruling classes.

Nor does it feel like it is aware of the sense of urgency about the scale of change this government in power is about to make, or the frenetic politicisation and motivation of what was so recently considered a largely indifferent generation.

If though, you have some idea of how the energies of the newly enthused can be directed into political change, right here, right now- then I'd look very much forward to hearing it.

Thanks! I think you need both social movements and structural change from political parties, I think we need to learn from Latin America.

I certainly don't think its elect X and everything falls into place.

I have written lots of stuff on strategy but just wanted to flag up while on the whole excellent Laurie's article needs to pose some other questions.

I suspect sadly we have missed the boat on electoral reform which is part of the process.

I think one of the main problems people and politics face locally, nationally and globally is simply that politics is run by big business. money, capitalism, neo-liberalism. The Green Party is different in that sense and has a perfectly good solution in that it strives for a form of politics not funded by big business and the rich. Combine that with many other policies and principles such as acting on a more local level which aids a more direct democracy than I think that makes for some good progression for the better.

A few weeks ago I would never never have expected the student protests, the uncut protests, the occupations etc etc. I would have staked my life if asked to that most people would tamely accept the governments abuse. That those of us that wanted to fight back would be largely outnumbered and ignored.
So, some fairly uexpected things have happened, if people are prepared to continue to protest as they seem to be then that gives hope for the future.
I was worried that the Labour Party were with a few exceptions keeping quiet, but am now wondering if actually they have made them selves irrelevant by their lack of action.
I think we have to keep going as we are, but keep moving, keep flexible, take inspiration from others, keep explaining to people who still dont realise, there are alternatives to cuts, alternatives to the consumer focused way we currently exist.

It's hard to think of Laurie Penny as left-wing when she supported Vince Cable's tuition plans. I thought the whole 'Education is a Public Good' thing was fairly obvious and necessary for anyone proclaiming themselves as socialist. It's the one thing the SWP has going for it: not every member's a blogger on a one-person mission to remodel the world of their temporary image of Utopia...

Unfortunately Jo the GPEW accepted a donation from Zac Goldsmith, (on the Electoral Commission website).

cheers Gordon, I think although Heavensforrend has had a justified go at me, I still don't think we are focussing on how we can change society, given all the things that make this difficult in the UK (although slightly less so in Scotland).

The problem you face (and you will certainly not want to hear it) is that the Green Party turns off a large number of ordinary people as they come across as a bunch of hectoring middle class fops with the money and priviledged background that enables them to buy organic, work two days a week doing something 'useful' and gives them the time to be involved in local politics.

I agree with a lot of Green policies but some of the party members just make me want to run a mile - you know, the sort who will stop you in the street to lecture you about something that you know more about than they do...

anyway, good luck. I predict more of the same and a resurgent Labour Party in one year's time.

..but some of the party members just make me want to run a mile

Only some, Anonyminx?
Please name and shame the others so we can deal with them through the disciplinary procedures and reprogramme them to conform to stereotype.

Yes well said Weggis, we ain't perfect but uniformity is not cool.

Also I don't think the like of you and I or most Green Party members hector people about what they can or cannot do...

Hope you are good. Here is the piece I have written on the idea of a new left for Ceasefire magazine: