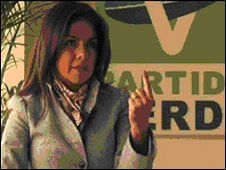 The Irish Green Party will lose all their seats in the General Election having gone into coalition with a centre right party who have literally bankrupted Ireland.

So they are attacking Sinn Fein in a vain attempt to gain more than 0.5% of the vote, disgusting. The mainstream Republican movement has embraced peace. Peace is a green value, they have put aside their guns, a cheap shot to make John Gormley less humilated, it just isn't on.

But the Greens are going for a stunt according to Irish political bloggers Cedar Lounge.

They have no shame, they should apologies. Instant karma's going to get you.

In Mexico the Green Party is attacking the Zapatistas to build a tourist centre:

The Zapatistas had been expressing increasing concern about the intentions of the priistas and the Partido Verde (Green party) to develop the Agua Azul waterfalls and its surroundings with the funding of foreign multinationals into a mass tourism complex contrary to their own attempts to preserve the natural beauty of the area. On January 26th the Zapatistas had warned about an eviction of the tollbooth. Workers at the Fray Bartoleme de las Casas (Frayba) human rights centre in San Cristobel have also been documenting attempts by the priistas to invade the land occupied by Zapatistas since 2002 at Bolon Ajaw near the waterfalls.


Both Green Parties should be kicked out of the global green movement, given the urgency of crisis on the planet, we have to do better, not serve corrupt powers.

Greens evolved in response, partly to left parties who had sold out and lost their way, Greens need to be principled.
at February 08, 2011

you could also add to this the Mexican "Green" Party leading the campaign for the reintroduction of state murder (capital punishment).

Although there are numerous others around the world who do shame to green politics. The Czech Green Party for example who went into coalition with the extreme right ODS and did nothing to prevent the US military from opening missile operation centres on their territory. I was delighted the day they lost all their seats. The same is going to happen in Ireland later this month and it can't happen too soon.

The problem with Ireland though is who is there left to vote for? Sinn Féin are standing firm against the cuts but they still seem way too nationalistic and authoritarian in their rhetoric.

This illustrates a key problem with Green politics: the extremely diverse, uncertain and ambiguous nature of its underlying ideologies and they should translate into concrete political tactics and strategy.

This diversity and ambiguity is useful when parties start to grow and recruit members. A very wide selection of people are willing to join a party that places 'saving the planet' at the center of its image and programme.

But in the context of competitive electoral politics such diversity typically leads to breath-taking opportunism as the 'electoral realists' increasingly detach themselves from the 'grassroots fundamentalists'.

As Green parties elsewhere continue to grow and inch closer to formal political influence I suspect further splits, betrayals and electoral collapses will be on the agenda.