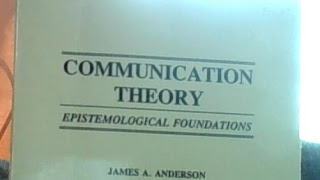 I am a great visitor of charity shops in search of books, I picked up Communication Theory: Epistemological Foundations by James Anderson, for 75p in the Red Cross shop in Blandford Street, Sunderland.  Every penny was well spent!

The book is aimed at students taking communication studies of various kinds and looks at the various assumption behind research in this area.  However it would be useful for any student interested in the basis of knowledge claims in the social sciences and, has something to say to those working in the natural sciences too.

Epistemology is a big bad word but its meaning is straightforward, it is the study of how we know things, it is about truth claims,  How do we know that something to put it bluntly and simplistically is true or false.  From the moon landings to climate change to the theory of evolution to debates in politics about the effects of benefit cuts, truth can be highly contested.  So while this is a rather technical book dealing with research methodology, its subject matter matters potentially to all of us.

Of course there is an argument that this all rather obscure and irrelevant nonsense.  Indeed it is true that many truth claims are straightforward and not much debate or theory is need to distinguish the incorrect from the obvious.  I noted this from twitter which puts this quite nicely.

No argument with Matt Wallace on this.

However, all academic research, whether in social sciences like sociology or even the natural sciences like chemistry, rests on epistemological foundations.  By this I mean a set of assumptions about how we decide what is true or what is false.

Again, it has been argued that there is nothing much to see, truth can be tasted like coffee, what holds practically is true and we don't need to engage in complex discussion or to read books on epistemology.

Anderson argues that we used to have a straight forward epistemology based on a notion of science where proof was possible.  To some extent this might include both social and natural sciences:

The question in epistemology (in fact the only question) is that of certainty. How do we know what we know? The standard answer to this question has been the progressive development of Baconian empiricism and Cartesian rationality [...] The scientific method , in fact all proper epistemology within this argument, is seen as a combination of good empirical protocols of evidence gathering and the right cannons of logic. (Anderson 1996: 4)


He notes this led to Newtonian physics and Darwinian evolution, a trusted method led to a secure scientific product.  However, the 20th century saw a major assault on such an approach to epistemology:

There were a number of reasons for its subsequent decline.  The mechanical insights of Newtonian physics provided unsatisfactory answers to the questions of the 20th century. The human sciences could not be contained in the physical science model and failed to coalesce around a common epistemology. The trustworthiness of experience was undermined in studies on perception, the mind, culture, and language.  Our observational evidence was shown to be corrupted by theories. Theory itself was shown to be better explained by sociological rather than evidentiary practices.  And the evidence we did generate was shown to be promiscuous rather than faithful.  The conclusions were stunnding: observations are arguments, theories are sociopolitical practices, and truth is plural.  (Anderson 1996: 4)


Thus we are in a very uncomfortable position.  To rely on classic science method is problematic, certainty is challenged.  Yet the postmodern condition described by Anderson is also problematic, to make a claim that truth is multiple is still to make a truth claim.  Postmodernism and allied approaches, as broadly advocated by Anderson, tend to eat themselves.

Anderson, whose postmodern position, is not one, at least in a pure version, I share, does in this book carefully describe and criticise different approaches to methodology.  While I don't endorse his methodological position, I certainly endorse his book as a very useful, clear and concise guide.  Moving beyond naive certainty and chaos, isn't easy, personally my rough view is that reality exists (ontological realism) it is very difficult to catalogue so a degree of both rigour and pluralism is necessary (epistemological pluralism).  Broadly Althusser and Ostrom inform this approach, I have especially been finding the discussions of Gaston Bachelard useful for understanding how scientific method in the natural sciences is more up for challenge than we might think at first.
at September 03, 2017