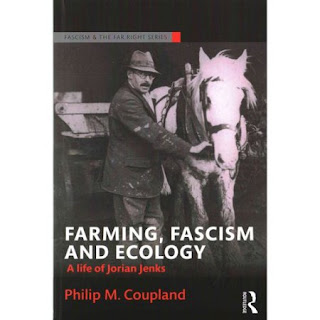 Philip Coupland was kind enough to send me a copy of his book on Jorian Jenks last year. What with one thing and another, including helping to organise the Global Greens Congress, finishing my own book on Elinor Ostrom and that episode with Mrs May, I have only just got around to reading it.

Jenks (1899-1963) was both a leading fascist and a founder member of the Soil Association.  His story is part of a picture of ecofascism.  While the current Green Party is on the left, picking up votes from those disillusioned with Blairism and now competing with Jeremy Corbyn, green politics has not always been on the left.

If we take the key pillars of green politics often described as 'ecology, social justice, non violence and grassroots democracy' this describes an ideology which is indeed left.  However the union of politics and ecology has in the past been on the right.

The Green Party, was originally set up as PEOPLE in the early 1970s, and founding members included former Conservative Party members.  In the late 1960s and 70s, ecological politics had a Malthusian tinge, concern with over population and demands to restrict human action to save the environment.  Indeed, a lot of my recent academic work, has been putting forward Elinor Ostrom's arguments for local cooperative management of resources rather than state or market control in all cases.

The Soil Association, Britain's leading organic farming network, was founded in 1946.  Jorian was a founding member and in an editorial and organisation role was highly significant in the organisation.  He had been a member of the British Union of Fascists, advised them on farming matters, and was a BUF parliamentary candidate in Sussex.  He was interned in the Ascot camp during the Second World War, seen like many BUF as part of a potential fifth column.

The Soil Association today has no links with far right and have tended to distance themselves from Jenks.

During the 1930s there was a definite ecofascist ideology and Jenks was friendly with the likes of Rolf Gardiner and other far right environmentalists.  I briefly examined ecofascism for Red Pepper, a while back.

Jenks had an appalling ideology but is portrayed in human detail in Coupland's biography.  Coupland has done a huge amount of research and has had access to mountains of primary documents, he clears up a number of myths about Jenks.  For example, often thought to be of 'Yeoman farmer stock', he was born of liberal urban parents and his turn to the far right is complex.  I might add this was not dishonesty on Jenks' part; he seems a pretty modest person and avoided personal myth-making.

Jorian often comes across sympathetically but its worth remembering he was only a couple of degrees of separation from the SS.  Fascism grows slowly, not all its manifestations are obvious and sympathetic human beings can promote monster-like acts.

If you are interested in the history of organic agriculture movements or the British far right, this is worth reading.  It is well written, very detailed indeed and a beautifully produced book.  The theory and larger dynamics are somewhat obscured in places but it's a powerful contribution.