How to Teach Quantum Physics to Your Dog 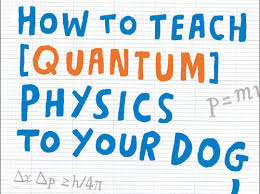 My wife, noting my interest in but poor understanding of mathematics, borrowed How to Teach Quantum Physics to Your Dog, for me from Bracknell Library.  It is in the genre of light physics and mathematics, I have also recent enjoyed Simon Singh's The Simpsons and Their Mathematical Secrets (which incidentally is very good).

The conceit of the quantum physics book of explaining to the dog is stupid but fun too.

Much of this I don't understand but I guess if I keep reading something  will rub off.

More seriously it fits with my more lengthy posts recently on epistemology, the question of how do we know what we know, here and here.

Clearly while I am committed to both rationality and materialism, what we mean by matter is up for debate and any one with any kind of mathematics knows that things get seriously weird quite quickly when rationality based upon mathematical formalism comes into play.  So while we should eschew anything goes relativism (if that is really a thing rather than an accusation) rationality ain't what it used to be either.

Quantum  uncertainty is a fundamental limit on what can be known, arising from the fact that quantum objects have both particle and wave properties.
Uncertainty is also the first place where quantum physics coincides with philosophy.  The idea of fundamental limits to measurement runs directly counter to the goals and foundations of classical physics. Dealing with quantum uncertainty requires a complete rethinking of the basis of physics,
(Orzel 2013: 46)

Looking forward to gradually eroding my ignorance by reading the rest of this title!  And just because its science doesn't mean that it is certain.