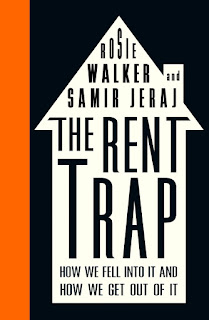 Samir is a friend and Pluto Press regularly publish my books, so I must admit a conflict of interest, nonetheless with this warning I hope my brief review will be useful.
It is generally acknowledged that the UK housing market is broken.  More and more, especially young people are either homeless or suffering from high rents, on the other side of the equation landlords are growing richer.
Own property and your income and in turn your wealth in property tends to grow.  Fail to own property and you pay more and more in rent.  Rent controls are seen as anti-market, rent controls that limit rent increases are thought to discourage landlords from renting, restrict the quantity of rent accommodation and make shortages worse.

Walker and Jeraj challenge this view.  Landlords can make enormous amounts of money by renting, so tend to buy up housing, this crowds out potential homeowners and, in turn, pushes up rents.  The Rent Trap shows how with the decline of council housing, marketizing the housing stock has led to increasing inequality in Britain.
The book is vividly written with lots of real life horror stories of landlords evicting tenants illegally, charging high rents and failing to carry out repairs.  As the authors note while must dog owners are compassionate to their pets, animal welfare laws are still necessary.  Thus, while perhaps most landlords are ethical, stronger safeguards are necessary.  Even where the law protects tenants, often they cannot afford to act to defend their rights, or both tenants and landlords are ignorant of the law.
As well as cataloguing a major source of inequality, The Rent Trap has a lot of good advice for tenants, including a guide ‘How to take your landlord to court’.
The deeper message is we need more safeguards and a huge investment in social housing including social housing as well community land trusts and housing cooperatives.
It is an illustration of the pathologies of the market, where speculation and luck distort the price mechanism.  It is also a reminder that the young increasingly feel excluded and put upon, the rent trap, along with zero-hour contracts and student debt, has fuelled supported for Jeremy Corbyn.
Jeremy has been a long-term advocate for those who rent and there is an interesting interview with him from 2015 a few days before he took the decision to run as Labour Party leader.  It is instructive that until recently rental abuse was off the political agenda, it is also interesting that a third of MPs are landlords.
I think my only criticism of the book is that it could have collected policy suggestions into a neat conclusion but otherwise it is well researched, well written, persuasive and illustrates an often forgotten (by the media and politicians) problem.

The Rent Trap is one of a series of books for the Left Book Club.

Some scary stats
11 million private renters in UK.
Many 16-18 spend 80% of their income on rent.
1 in 12 renters too scared to ask landlords for repairs because they fear eviction.

And some scary stories
One renter threatened at gunpoint.
Organised crime moving into renting.
Parents with young children moving from one home to another because of powers of eviction.
at September 19, 2017