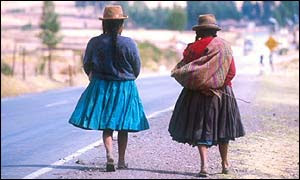 More than 200,000 people in rural Peru were pressured into being sterilised by the government of former President Alberto Fujimori, an official report has revealed.

The Health Minister, Fernando Carbone, said the government gave misleading information, offered food incentives and threatened to fine men and women if they had more children.

Poor indigenous people in rural areas were the main targets of the compulsive family planning programme until 2000, when Mr Fujimori left for Japan amid mounting corruption allegations against him.

Mr Carbone said there was evidence that Mr Fujimori and a number of high-ranking ministers could be held responsible for "incorrect procedures" and "human rights violations".


Thanks, Derek for posting a link to my articles. They were a slightly hurried attempt to summarise the situation and to suggest that a socialist alternative needs to address the issue of resources, without falling into the traps of the population controllers. I should add that I have been criticised for not concentrating enough on how population control programmes are an attack on women and their right to control their bodies. This criticism is probably justified. What is interesting in reading population controllers stuff is that the racism and class prejudice jump out at you (e.g. the quote from Jonathon Porritt from the Ecologist on Africa, for example), but the underlying context of arguing for a programme to control women is (of course) never made explicitly and it is fairly easy to “miss the wood for the trees”.

Since writing the article, I have read Matthew Connelly’s book “Fatal Misconception” on the development of the population control movement from the 1800’s. Its account of the Indian and Chinese programmes has led me to be even more convinced that there is no such thing as a “voluntary population control” programme, in the sense that, if there is a government foreign agency or NGO advocating/organising such a programme, it will inevitably end up using using coercion, or at the least bribery - and pretty early on at that.

The interview with Betsy Hartman is interesting too: in fact it was this interview that led me to start looking into the latest round of population control propaganda (and its new context, climate change), but I had forgotten that I had read it! So it is useful to be reminded of its existence!

Some words on the Optimum Population Trust. I recommend visiting their web site. These people are not on the fringes of society, as a look at their supporters and officers shows. I debated population with a member of the OPT at the recent Campaign Against Climate Change conference in London. The workshop was obviously self-selecting, in that it was only likely to attract people who thought population was a burning issue, but I was shocked at how closed many of the participants’ minds were on the issue. None of the advocates of population control addressed my arguments. A member of the Green Party held up a map of the diminishing land per head in Africa over the last forty years (or whatever), making it clear that the problem was “too many Africans”, without addressing at all questions of land ownership (including for women, who do most of the agricultural labour), crops for exports and that labour power could be used to rebuild the environment in Africa. He then stated that the eugenic practices of the Nazi era were over: I pointed out the Fujimori had had sterilised 200,000 native Americans in Peru in 2000. Of course, this outlook is not the official policy of the greens (now).

If people are interested in reading about reactionary environmentalism, I can recommend TC Boyle’s novel The Tortilla Curtain. This curtain refers both to the US-Mexico border and the class divide between middle class eco-reactionaries and the super-exploited immigrants of California.
at July 06, 2008

Quite how much the Green right are anti-libertarian, except regarding market economics, emerges when population is discussed. How about this from Porritt:
: “…there is little between where we are now and the ecological abyss that necessarily awaits us if 9 billion people are ‘permitted’ to acquire trinkets, get obese, travel the world and own several cars, …”(p.88).
So he must be advocating a new capitalist world order to regulate population size and body shape.