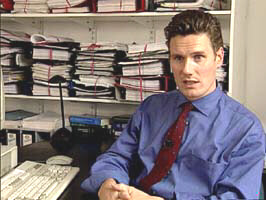 'One of the country's leading human rights lawyers is to become the new director of public prosecutions in a move described in legal circles as bold, exciting and encouraging.

Keir Starmer, 45, who has challenged the government over the reach of its anti-terror legislation and taken on the British military over the abuse of prisoners held in Iraq, will head up the Crown Prosecution Service from November.'

Starmer, 45, who gave free legal advice to the McLibel Two in their struggle against McDonald's during the longest-running English court case, is the head of Doughty Street Chambers. He led the legal challenge in the Lords which ruled that evidence obtained under torture was inadmissible in court. He also acted for two terror suspects in another Lords case last year which declared the control order system for terror suspects was unlawful under human rights law.

I used to do some ecosocialist politics with Keir in the late 1980s and early 1990s, so good news that he has this position. I haven't seen him in years and years but I was impressed by him.

His human rights and Mclibel work has been very important.


Even all the hard and may be seemingly thankless politics may have a positive effect, its networking with good people, campaigning, getting ideas across and learning, the side effects are may be more important than the immediate battles lost and won.

what else do you expect?

the British establishment is full of one time "radicals"

the lure of power is strong and normally wins out

the Brown Govt. is awash with ex-"Marxists"

btw, what public school/bit of Oxbridge did he go to?

you are sadly probably right but buy the man a pint for the mclibel work if nothing else.

Kier Starmer took a few lectures on a Masters degree in Human Rights I studied for a few years back. Little did I know that my lecturer would become the future Director of Public Prosecutions! Clearly a poacher turned gamekeeper to use a much cliched phrase.

There certainly is some form of precedence, Hewlett and Harman came to government via the National Council for Civil Liberties, yet they are probably some of the most staunch defenders of 42 days incarceration, without charge.

The Millibands, offspring of that great radical Marxist Ralph, none too left now.

I think the British establishment has this down to a fine art, find an exceptionally talented governmental opponent then turn them over to the Dark Side with the promise of titles, power, privilege and almost unlimited adoration.

I suspect that there is probably some convention which ensures that the DPP gets knighted after a period of time, along with grace and favour property and allowances

So tempting? what's an Oxbridge chappy to do?

Too much eco, not enough socialist. Same old Greens.

give him a chance eh - how about waiting to see what he does before judging him? And if you dont like Mr Stamer how about suggesting someone else instead - but its far harder to offer solutions than to just carp from the sidelines. Bunch of whingers