GREENS ON COURSE TO GIVE DAVIS A SCARE 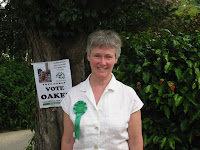 The Greens are heading towards their best by-election result ever, beating the 6.1% in Vauxhall in 1989, and in the process giving David Davis and the Tories a scare in the Haltenprice and Howden by-election. The Greens are the main challenger to Davis, challenging his claim to be the defender of British civil liberties.


Dr. Derek Wall, who is campaigning in the constituency today, said


"David Davis is taking the people of Haltemprice and Howden for granted with this stunt, but he may find that he will not have the election completely his own way.


"Many voters find his illiberal stance on 28 days detention without charge, support for capital punishment and support for Section 28 just too much to swallow. The Greens' candidate Shan Oakes is the only option available to those voters.


"There is a real interest in Green Party policies in support of our civil liberties, for the withdrawal of all our troops in Iraq and for growing a green economy. Voters realise that Shan Oakes is the main challenger to David Davis and Green Party support is growing rapidly."
at July 10, 2008

Put it this way: either 1) Shan is elected tonight or 2) there should be a campaign to take all of Davis's salary from here on in to pay back the estimated £200,000 costs of his 35% turnout by-election. If Shan isn't elected tonight, I am sure she has picked up plenty of useful information on the constituency and how to be elected at the next General.

So the Red-Greens came second. Now all you have to do is find constituencies where Lab & Lib don't stand.

Re Davis's support for hanging - do they have executions in Cuba? And re section 28 - can gays join the (pacifist) Cuban army?