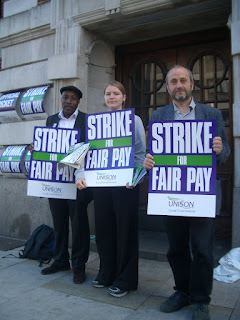 Had this from James, Joseph is a good friend, co convenor of Green Left and International Secretary of the Green Party of England and Wales.


Joseph Healy, the Green Party's Parliamentary Candidate for the Vauxhall Constituency today joined the picket lines in solidarity with Lambeth's local government workers who are striking over a government-imposed pay cut.

Across the country 600,000 local government workers - care assistants, refuse collectors, cleaners, teaching assistants and social workers - are taking industrial action because employers are demanding that they take a pay cut. The employers "final offer" amounted to just 2.45 per cent whilst food prices have risen 9 per cent in the last year and energy bills by 15 per cent.

The Green Party has a record of championing trade union activism, from defending attacks on public services to advocating the repeal of the anti-trade union laws introduced by the Conservatives and left in place by Labour. On the Greater London Assembly, Green Party Members were integral in establishing the Living Wage Unit aiming to lift London's lowest paid workers out of the poverty trap.

Joseph joined strikers at Lambeth Town Hall in Brixton and pledged the support of Lambeth Green Party in their fight for fair pay and against privatisation. Meanwhile local Labour MPs, Kayt Hoey, Keith Hill and Tessa Jowell, were nowhere to be seen whilst several Labour Councillors crossed picket lines.

Joseph, who is an active member of UNITE and Co-Convenor of the Green Party's eco-socialist platform, Green Left, said: "Everyone should be clear that the offer on the table is a pay cut in real terms. The Green Party entirely supports the right for workers to demand fair pay. Gordon Brown's Labour Government appears content to effectively make working class people pay for the country's economic woes, which is simply unfair."

"The Green Party is working with trade union activists up and down the country to build grass roots resistance to pay cuts and privatisation being imposed by Labour, Lib Dem and Tory administrations."

James Caspell, a Lambeth UNISON shop steward added: "It's great that Joseph and other Green Party representatives are joining picket lines up and down the country and showing the sort of solidarity that is entirely lacking from the Labour Government. Britain is crying out for a new left alternative and I am sure that Green activists will continue to play a key part of the workers' struggle for environmental and social justice."
at July 16, 2008