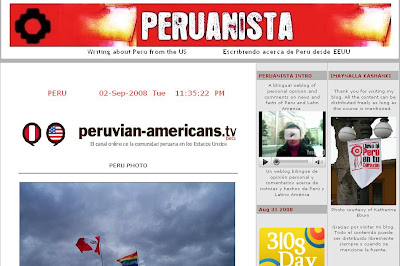 Just noticed this...., if I speak out against John Gormley, will google cut my connections, if I point out the infamy of Pete Garrett will they ban me from the net...please support Peruanista, he does good work, it is work that has saved lives...Google should give an apology and put his ch back on.

Youtube has suspended my channels CarlosQC and Peruanista without previous notice. Not sure how many videos I lost, but they were hundreds, almost 2 years of work. This is wrong.

What could motivate such abuse?

Was perhaps the last video I uploaded with Cynthia McKinney sending a message of solidarity to the Indigenous and Afro descendant peoples in the Americas? In that video I mention the abuses that our peoples have suffered alike the Palestinian people suffers today because of the state of Israel.

It could be the videos where I denounce and expose the genocide of Bagua in the Peruvian Amazon, where hundreds of Amazonian Indigenous peoples were massacred by the Peruvian government. A video where I demand president Alan Garcia to step down had already about 5,000 views in a week.

Maybe it were all the videos where I protest against the U.S. Peru Free Trade Agreement, an abusive and corrupted deal that I hope one day will be renegotiated by future governments of both countries.

It could be the video where I expose the OAS General Secretary and his censorship against blogger, writer and historian Montserrat Nicolas? Perhaps it was the video where I face the ambassador of Peru to the U.S. Luis Valdivieso, demanding him to stop lying about his government's killings of Peruvian civilians in Bagua.

Or it were perhaps all the videos where I denounce the reality of Peru and its extreme poverty, racism, injustice, human exploitation and corruption, all of which most Peruvians have to endure in a daily basis, because of the lack of true democracy. Maybe were the videos where I show Peruvian traditions, music and dances of our Indigenous and Afro descendant populations, including traditions of the Peruvian American communities.
at July 18, 2009