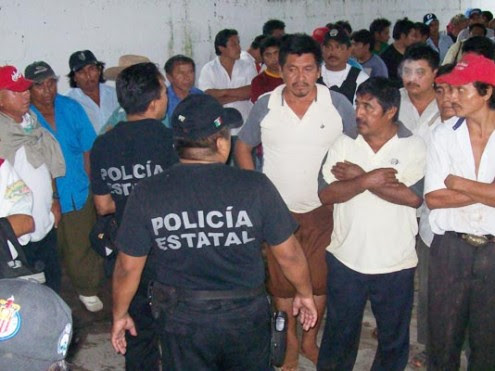 More than 200 Indigenous Mayans were arrested this week for setting up a roadblock just south of Cancun, in the Mexican state of Quintana Roo.

On the night of November 24, Mayan ejidos (communal landowners) from the municipality of Felipe Carrillo Puerto went to block the main highway leading from Felipe Carrillo Puerto to Cancun after learning the government would only pay half of the reimbursement monies they were promised after losing many of their crops due of a lack of rain during this year’s monsoon season.

Once the state and federal police officers caught up with the Mayans, according to statements from Ejido commissioners and delegates, they started to abuse and arrest anyone they could get their hands on. The police then scoured the streets of Felipe Carrillo Puerto, where the confrontation took place, arresting anyone they considered to be an Ejido. 228 people were arrested in total.

The Latin American Herald reports that all 228 Mayans have been transported to a federal jail in Chetumal. Quintana Roo’s Deputy Public Safety Secretary, Didier Vazquez, says the Mayans will now be “handed over to federal prosecutors because blocking a highway is a federal crime.”

The Ejido commissioners are demanding the full release of all 228 unjustly detained Mayans.

Why are the Indigenous Mayans of Quintana Roo being Beaten and Detained?
Translation c/o restoringtheamericas.blogspot.com

Through this medium we want to inform of the arbitrary detentions that have been suffered by the ejidatarios (communal landowners – editor’s note) of the Mayan communities of the municipality of Felipe Carrillo Puerto. Given the events that took place on the highway from Felipe Carrillo Puerto to Cancun the past night of November 24 where various groups of ejidatarios took the aforementioned highway in protest of the insufficient pay of 50% offered by the SEDARI (The state Secretariat of Agricultural and Indigenous Development – ed.) due to failure of farmer’s crops from lack of monsoon rains.

Following these events state and federal police officers have taken illegal actions beating, abusing and encarcelating the ejidatarios; it is worth mentioning that these acts were realized in the interior of the city, in the streets, and even in the central park on the 24th and towards people who because of their simple appearance were considered to be ejidatarios, detaining in this matter 228 campesino farmers.

We mention also that these actions of the peasantry are a product of the evident inequality and the contrasts that exist in the state of Quintana Roo which receives a great deal of investment in the north, in the tourist zones and we see that there are no development projects for the mayan communities that live in the same conditions as they did five hundred years ago while these communities are owners of the natural resources of the state.

For these reasons we demand the liberation of the 228 citizens who are imprisoned.

For the prompt and immediate liberty of the 228 imprisoned indigenous mayans of Felipe Carrillo Puerto!