Ed Miliband should take the train 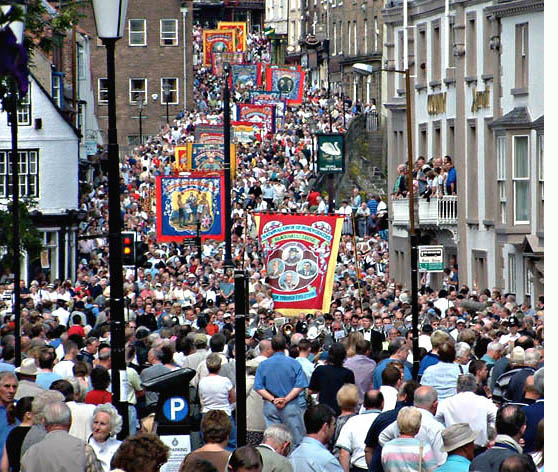 A lot of my friends are off to the Durham Miners Gala, my heart goes with them, its one of the premier labour movement events.

One person who wouldn't be there is Labour Party leader Ed Miliband.

Scared of the Murdoch press and the Daily Mail he refused to go.

Too scared to move an even an inch, he will be buried like the News of the World.

Sad but true, in Britain the right are powerful and the media largely set the political agenda but a little positive movement is not impossible.

Well it is for Ed.

On to this account from my amigo at the Peoples Book shop, Durham....oh if you are about today look the shop up and buy an armful of red and green literature.

I hope Ed Miliband enjoys his day tomorrow. It's a shame he couldn't find a window in his diary to attend the Durham Miners Gala. Somewhere near 100,000 have found a window and will have the most superb day, celebrating both our shared history embodied in the Durham Miners and the real and practical necessity of trade unions in the here and now. I won't go over old ground, because Dave Douglass has written very eloquently about Ed's about-turn here, but suffice to say that in his 'no show', he's keeping alive a miserable record stretching back to 1985 – when Neil Kinnock took the hump. To be fair to Ed, the rail links are not what they were - and anyway, he has loads of homework to do. The history of the Labour Party, in 3000 words, Ed - my desk by Monday morning.

The Gala is quite simply the largest gathering of the Labour Movement in the country. A few years ago now, a real turnaround took place and the Gala became about the wider Labour Movement and not just the NUM. Now it is a UCU, PCS, Unite, GMB and Unison as well as a NUM affair. It goes without saying that the 40-odd brass bands are wonderful and anybody that hasn't heard 'Gresford' being played on Elvet Bridge will probably never truly understand the emotional attachment that the wider Labour movement has for the Miners and the sacrifices they've made. The atmosphere on the march and down on the Racecourse is incredible and here you'll see sense of working class community which we're constantly told is dead and gone.

One of the things our culture perpetuates is a fascination with the new. Politically, that found it's ultimate expression with New Labour. Pretty much everything that went before was branded Old Labour – and this included class, as Owen Jones has recently explained, as well as trade unionism. Huge swathes of our history have been written off by the media, political elites and of course politicians on our doorstep and further afield. And yet, the Durham Miners Gala keeps rumbling on - actually growing each year. Maybe, just maybe there's something going on in Durham that Ed and his mates could learn from. Just a thought...