Ecological politics starts in the Amazon 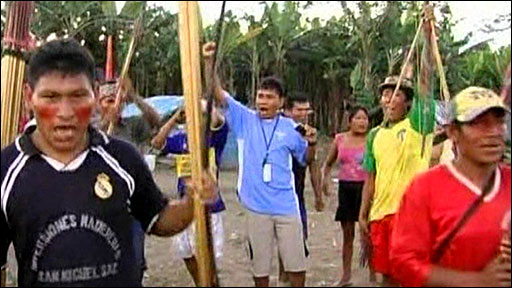 well I am just about back from the euro election experience!

I have not really been focussed on Peru.

however dramatic events have been unfolding.

Indigenous people have been taking part during the last month in a huge protest about President Alan Garcias' plans to open up their land in the Amazon.

Serious action on climate change, mostly it is utter bullshit, we need to defend the Amazon as a carbon sink and we need to actually halt the extraction of oil and other fossil fuels.

Even if climate change was not an issue, 'development' needs to be led by local communities. The indigenous fear that their land will be stolen by corporate interests and the forest which is their basis for economic activity will be taken away from them.

Hugo Blanco the Peruvian ecosocialist who edits 'Indigenous Struggle' will be in Britain next year on a speaking tour.

There is an excellent account of the struggle in Green Left Weekly, a weekly newspaper I highly recommend.


Mass protests by indigenous communities continue to spread throughout Peru. This is despite a violent crackdown by police and military forces following President Alan Garcia’s declaration of a 60-day state of emergency in the Cusco, Ucayali, Loreto and Amazonas regions on May 9.

Since April 9, indigenous communities have shut down oil fields and gas pipelines, and blocked roads, rivers, airports and other installations. These actions are in protest at government decrees that open access to indigenous people’s lands to facilitate oil, mining, logging and agricultural companies.

Garcia decreed the laws under special powers awarded to him by Congress to bring Peruvian law into line with a free trade agreement (FTA) signed with the United States in December 2007.

One of the most controversial decrees (Legislative Decree 1090) removes some 45 million hectares, or roughly 60%, of Peru’s jungles from the country’s Forestry Heritage protection system.

The Interethnic Association for the Development of the Peruvian Jungle (AIDESEP), which groups 1385 indigenous communities, is calling for the full repeal of the decrees.

AIDESEP said the decrees were deemed unconstitutional, as they violated the right of indigenous peoples to be consulted prior to any project on their land. This is established by International Labour Organisation (ILO) Convention 169, which has a constitutional character in Peruvian law.