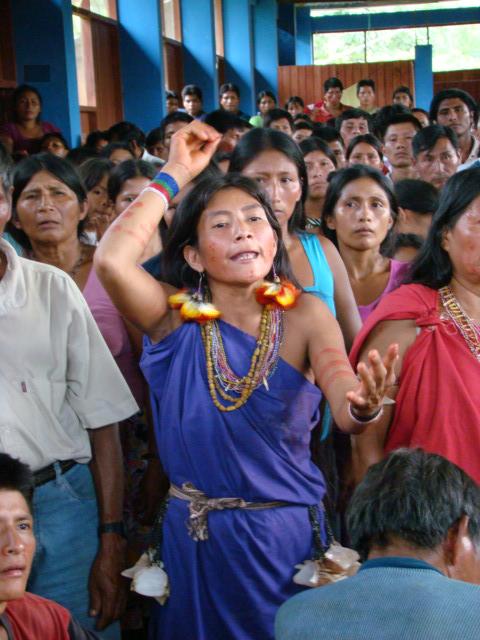 “Formerly, when animals were people, a giant crab, called Ugkaju, commanded an army composed of ants and fish that killed the strongest warriors, than were the tigers, vixens and birds as the paujil and the pava of the mount.
Ugkaju struck the water with its clamp forming floods that drowned the people. The warriors could not defeat it.
Finally, the weakest animal met to plan an attack. They were the armadillos and some small birds that make their nests in earth holes.
According to the plan, they were digging tunnels that arrived at the house of Ugkaju. The next time that the giant crab struck the water, the little animals opened the tunnels and all the water ran by them and he was in dry.
Then the paucar took its lance and killed him.”

Our war is a defensive one. Peruvian Company Aphrodite and its owner Dorato Resources Inc., the Canadian corporation which desires to exploit our natural resources without respecting our rights and our lives, says to their shareholders and to the public that Dorato “has excellent relationships with the local community”. Not only good but “excellent”... But from our place, we the Awajun and Wampis peoples have a totally different view.

The Peruvian Government is allowing mining exploration works in our territory with the intention of authorising exploitation activities, despite the area is ecologically vulnerable and contains several basin headwaters situated in the high mountainous areas, from which water resources descend and on which our Awajún and Wampís communities depend for their survival and physical and cultural reproduction. The situation is urgent and extremely serious, which threaten seriously, imminently and irreversibly our rights to life, to health, to ethnic identity and to free self-determination.