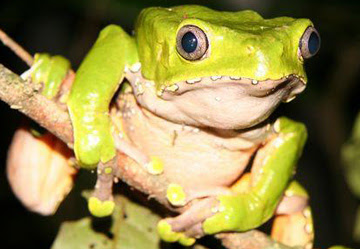 will produce a cheesy statement of what I want to see in 2008 (capitalism, biofuels and frequent flying being out...ecology, social justice, home cooking and sharing in!)

But for the time being pop a cork to the year of the Frog...to be honest we need a whole ecosystem approach especially stopping habitats from being bulldozed (palm oil no thanks)

Frogs are lovely though are they not? The beauty above is one I guess you can lick to get high, a better alternative than hard drugs or synthetic magical compounds..

The giant monkey frog of Peru is known for its mind-altering skin secretions. Shamans in the Amazon rain forest have used this species in hunting rituals. Like other amphibians from around the world, the giant monkey frog is threatened by climate change and habitat loss. Photo by Rhett A. Butler


Scientists say that without quick action, one-third to one-half the world's frogs, toads, salamanders, newts and caecilians could disappear.

The coalition, dubbed "Amphibian Ark", is calling 2008 "The Year of the Frog" in an effort to raise awareness on the plight of dying amphibians, at least 165 types of which are believed to have gone extinct since 1980. Amphibian Ark is seeking to raise $50-60 million as part of a 5-year $400 million Amphibian Conservation Action Plan to establish captive breeding programs for the 500 most threatened species.

While scientists have yet to identify a smoking gun, climate change, pollution, and the emergence of Chytridiomycosis, a deadly and infectious fungal disease which has been linked to global warming and is blamed for one-third of amphibian extinctions since 1980, are the leading suspects for the observed decline.


Although researchers don't yet know the origin of the parasitic chytrid fungus known as Batrachochytrium dendrobatidis, the disease is highly transmissible and spreading fast: the fungus is now found on at least four continents and was recently reported for the first time in Japan.
at December 31, 2007

It's weird that the smaller the creature, the easier it is to overlook its importance. Hopefully this special year for amphibians will change that.

Is Eco-socialism a diversion from the struggle?
See my blog.
Happy New Year Derek.