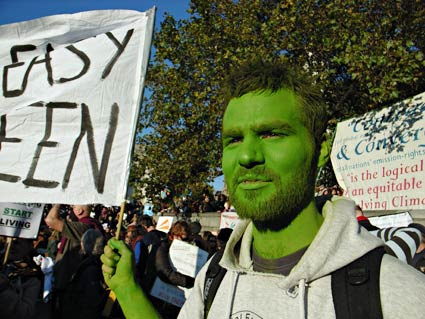 Got down to Tesco metro Regent Street where the ever energetic Andrew Boswell, a Norwich Green Party councillor, was demonstrating against biofuel, got ordered by the police into the 'cage' an enclosure of fencing, threatend with arrest and physically pushed into....in case the demonstration disrupted the flow of shoppers...difficult given there were just four of us! Biofuel watch stuff here.

About 200 cyclists rolled up and one of the police cops nodded enthusiastically at every bit of Andrew's speech!

Walked through the pissing rain down to Millbank and met up with the Green Party posse, a big turn out on the climate demonstration....feel like I talked to about 200 people I really knew well...bumped into a guy who remembered me from an Earth First! gathering who was a Zen guy, told me that you can go to plum village near Bordeaux and spend a week with Thich Nhat Hanh, the Vietnamese prophet of socially engaged zen, a major figure...so made myself a promise to go and see him and to take my esposa Sarah.

“Even the rice you eat is not free of politics, and the coffee you drink has a political flavour to it…. As for the goods you consume, perhaps they were made by child labourers, who should have been at school. And perhaps the products you use were manufactured at great environmental cost, which doesn’t make for good politics.” Each of us, says Nhat Hanh, should be aware of these factors. Therein, he adds, lies the path to Buddhahood. from here.

Bit like finding that Engels still lives in Hulme and welcomes people around for a cup of tea or that the great Muhammed Ali has kicked Parkinson's and you can go around his house somewhere at the end of rail line that starts at St Pancras. Remarkable!

Several hundred conversations later....lots of good contacts and feeling that the ecosocialist message 'against enclosure, against capitalism, for an earth for people not profit' got out.


It was a good day and right across the world similar marches were putting the message out...climate change is happening and real action is needed, not just the esoteric accountancy of people like Stern.

Hope the climate camp in 2008 will be big.....Gordon Brown green speech one day, support for Heathrow expansion the next as Caroline said in her speech.

report here from the Guardian:
Jonathan Essex, a steering committee member of the Campaign Against Climate Change, which organised the march, said: "For the sake of our children and the next generation we need to live in such a way that those of the next generation can also live.

"If the next generation say to us 'daddy, what did you do about climate change' the answer we should give is that we stopped it, any other answer is unacceptable."
at December 08, 2007