Who spies on the Greens? 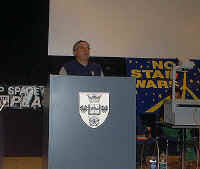 Le Chêne herself boasted a database of 148,900 "known names" of CND, trades unions, activists and environmentalists (- this was back in 1996!). The most relevant to BAe is a 'hardcore grouping' of about 200, of them she offered full biographies including national insurance numbers and criminal records where possible.

"Putting together profiles is not an overnight job," she notes in one report. "It takes time to get to know people, their nick-names, habits etc."

Several times Evelyn le Chêne reports about diskettes full of information from within CAAT have been confiscated, or -as mentioned before- printouts of directories of computers of CAAT-people. Returning issue at the CAAT meetings is the offer, quite insistent, apparently by one of the informers to install a new computer system at CAAT's office and at people's homes. is from here.


I was just saying to my esposa what a good all round guy Mark Thomas is, we bumped into him at Glastonbury and for a celeb he is pretty easy to chat to, he seems like a really good example of someone who doesn't fuck around when it comes to politics (rare if you ask me), he is a shrewed focussed and effective campaigner...now if he was up for being Green Party leader, well the title would fit the hombre!

Spies always fascinate me, you meet them, they are regular nice people but hey just as you become friends you work out that they run with the feds. Well paranoid is not good but there is a fair bit of infiltration...it is rare that it gets revealed in an open and shut way.

The best case was Mcdonalds sending spies into Greenpeace London....all cleared up and made transparent during the mclibel trial:

BBC Four: I hadn't been aware of the spies before seeing the film. How did you manage to interview one of them?
FA: It was bizarre. My sister was studying nutrition at the time. She was at the pub one night and another student on the course said to her, "I've never told anyone this before. But guess what? I used to be a spy for McDonald's!" She turned out to be one of the McLibel spies. Helen and David then got in touch her and she gave evidence for them rather than for McDonald's. There were seven spies that they knew of, who infiltrated the London Greenpeace groups for 18 months - one of them even had an affair with another activist. More here on this.

One lesson is the vital importance of data protection, keeping membership details under lock and key....

Notes from the Borderland is a good source for discussion of the secret state take a look here.
In the Guardian today Mark reveals why he thinks his friend Martin Hogbin may have been a spy infiltrating his campaign against BAE arms dealing..incidentally a campaign against the arms dealers organised with the great Nicholas Hildyard

Above all else, Martin would always turn up and lend a hand. He seemed to be everywhere: getting kicked out of a company annual general meeting, helping to run a mock fire sale of the Iraqi national bank in the City, dressed as a devil on May Day or organising press conferences at the start of the London Arms Fair. We were friends; I knew his family. He became an integral part of my life.

Then, in September 2003, the Sunday Times exposed a "spy network" run by a woman called Evelyn Le Chêne on behalf of BAE Systems, the giant, multinational arms manufacturer. The story claimed that Le Chêne had a database of more than 148,000 names and addresses of activists, peace campaigners, environmentalists and union members, and that she was running spies who posed as activists to obtain confidential information from pressure groups. According to the story, reports on CAAT were at one point being sent daily to BAE's security group from within the organisation.

Martin phoned that morning: "Fucking hell! Have you seen the papers? There's a spy! Who do you reckon it is?"

A week later, however, Martin was suspended from CAAT. An inspection of his computer by staff at the CAAT office had shown he had forwarded emails to a strange email address that no one recognised, with no surname or company name, and he had fallen under suspicion.

His closest friends were furious: not at Martin, but at CAAT. "How could they get it so wrong?" we thought. "How could they think Martin was a spy? Martin is our mate and a great campaigner."