A bit of pushing and shoving on biofuel protest 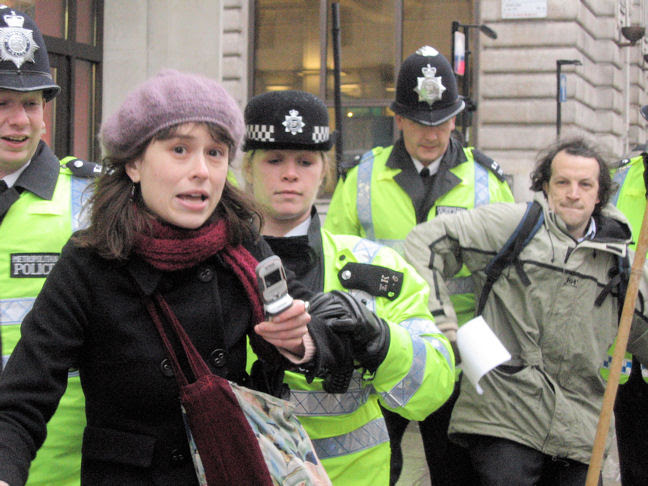 A bit ironic being forced into a pen at a demonstation against enclosure.

Oh well, that is the cost of living....comedy farce compared to the reality of people across the globe being fenced off their land, which is then stolen for capitalist development in India or China including the Olympics or for biofuel in Indonesia.

This is what it looks like on virtually every continent of the world, politicians talk green, goons go in seize the land from those who live green and cut down their forests.

Setiawan said the company has not kept its promises, clearing most of the land for its own use and causing severe fires and choking smoke. Villagers have protested to the local and provincial governments with few results.

"Who can put pressure on this company? The district head and the governor are the ones who can do it, not ordinary citizens like us. All we do is protest, but they accuse us of being anarchists," Ali told AFP.

"We cried and begged (the district head) to stop this company but he paid no attention," he said.

According to Setiawan, district head Raja Thamsir Rachman announced in 2006 that land clearing would be suspended until the dispute was resolved. But when AFP visited the site, heavy machinery continued to clear the land.

Repeated requests by AFP to meet with Duta Palma were declined.

Some of the biggest players reshaping Riau?s environment and economy are pulp and paper giants Asia Pulp and Paper (APP) and Asia Pacific Resources International Holdings Limited (April). Each company produces an average of around 2 million tons of pulp in Riau alone every year.

National police have taken over an investigation into illegal logging that was launched in February this year, releasing a list of 14 APP and April partner companies as suspects.

April denies it is involved in illegal logging. Its Riau subsidiary, Riaupulp, is observing a "de facto moratorium" on cutting natural forests during the investigation, said its environment manager, Elizier Lorenzo.

April puts a lot of energy into polishing its green image and is acknowledged by many conservationists as being ahead of the pack when it comes to mitigating the environmental impact of its work.

But even the best intentions can fall flat in the often lawless and disorganised world on the edges of Riau?s dwindling forests.

A proposed boundary of the expanded Tesso Nilo national park looks nothing like it should. In place of what should be a final refuge for endangered elephants and tigers, the land is stripped back, burnt and raw.

Man with beard on commons and enclosure here:

In the 18th century the hunted-out Gaels were forbidden to emigrate from the country, with a view to driving them by force to Glasgow and other manufacturing towns. [28] As an example of the method [29] obtaining in the 19th century, the “clearing” made by the Duchess of Sutherland will suffice here. This person, well instructed in economy, resolved, on entering upon her government, to effect a radical cure, and to turn the whole country, whose population had already been, by earlier processes of the like kind, reduced to 15,000, into a sheep-walk. From 1814 to 1820 these 15,000 inhabitants, about 3,000 families, were systematically hunted and rooted out. All their villages were destroyed and burnt, all their fields turned into pasturage. British soldiers enforced this eviction, and came to blows with the inhabitants. One old woman was burnt to death in the flames of the hut, which she refused to leave. Thus this fine lady appropriated 794,000 acres of land that had from time immemorial belonged to the clan. She assigned to the expelled inhabitants about 6,000 acres on the sea-shore — 2 acres per family. The 6,000 acres had until this time lain waste, and brought in no income to their owners. The Duchess, in the nobility of her heart, actually went so far as to let these at an average rent of 2s. 6d. per acre to the clansmen, who for centuries had shed their blood for her family. The whole of the stolen clanland she divided into 29 great sheep farms, each inhabited by a single family, for the most part imported English farm-servants. In the year 1835 the 15,000 Gaels were already replaced by 131,000 sheep. The remnant of the aborigines flung on the sea-shore tried to live by catching fish. They became amphibious and lived, as an English author says, half on land and half on water, and withal only half on both. [30]
at December 10, 2007