The US loves a dictator 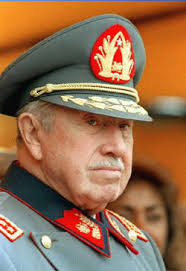 With the teeth of the Pakistani dictatorship now bared, we are beginning to see a mirror image of most of U.S. history throughout the last century. Although perhaps best seen in the vicious wars of Latin America, it is a fact that the U.S. government supported brutal, violent dictatorships on every continent, almost always against popular, and especially workers movements. Although most Americans would be hard pressed to actually recall the names of 4 U.S. backed dictators of the 20th century, it is a safe bet that the people who tried to survive in those countries will remember them for the rest of their lives. From Haiti's infamous Duvaliers, to Cuba's Batista, there were no dictators too wretched, too violent, too vicious for the U.S. to support. There's a good reason why when President Lyndon B. Johnson took the Oval Office after John Kennedy's assassination, he told one of his aides, "We've been running a damned branch of Murder, Inc. in the Caribbean."* That's because Washington was essentially internationalizing its program of repression and McCarthyism, according to at least one Latin American country. Scholar (and former diplomat) Clara Nieto wrote, in her remarkable 2003 work, Masters of War , the story of how the U.S. got almost the entire continent to go its way: At the Tenth Inter-American Conference requested by {former State Dept. chief John} Dullesand held in Caracas in 1954, he easily persuaded the meeting to adopt a declarationcondemning international communism and advocating hemispheric solidarity and mutualdefense against "Communist aggression." The chancellor of Guatemala, Guillermo Toriella,warned that on "the pretext of combating Communism, fundamental principles of democracycan be contravened, violations of human rights justified, and the principle of non-interventioninfringed upon." The declaration, he argued was "the internationalization of McCarthyism."The majority - all dictatorships - supported it; Argentina (under Peron) voted against it andMexico abstained. Costa Rica did not attend the meeting, since Jose Figueres refused toparticipate in this "assembly of dictators in a country governed by the most brutal and corruptof them all, General Perez Jimenez" {C. Nieto, pp.138-139}. Thus, generations were subjected to the terrorism of their own governments, their own armies, paid, and trained by the Americans. These U.S. trained terrorists launched wars against their own people; students, teachers, trade unionists, writers, intellectuals, priests, Indians, and beyond. Yet, that was then. What now? Despite all the gas and rap about "freedom", "democracy", and the like, the U.S. is, once again, depending on a dictator who has essentially shut down the Supreme Court, whipped lawyers in the streets, waged fraudulent elections, exiled his political opponents, and ruled with an iron fist. The differences between Buma and Pakistan could be measured in inches. Yet, none of this really matters to the White House. What matters is what has always mattered. That the dictator do the bidding of his imperial masters - the people be damned. There's a reason why Latin America has elected predominantly anti American governments in the past decade, and it had nothing to do with the easy media fiction that Hugo Chavez made them do it. For millions of people, they remember the so called 'secret wars' waged by armed puppets of the Americans-and they want no more of it. Dictatorship 2 -- Democracy 0. --(c) '07 maj *[Source: Nieto, Clara, Masters of War: Latin America and the U.S. Aggression (From the Cuban Revolution Through the Clinton Years) {New York: Seven Stories Press, 2003} ]
at December 13, 2007

Derek, you love dictators as well, what is your position on Castro?

Of course, there are real problems and legitimate concerns one could (and should) raise about Cuba (and I have no doubt Derek would tell you that himself) and much should be changed from my point of view, but comparing Pinochet and Castro shows a profound depth of ignorance likely the result of years of ideological media assault. Pinochet was a reactionary fascist dictator in the employ of a mass murdering global empire. Fidel Castro, with his movement, overthrew a reactionary empire-backed dictator and has been involved in his country's valiant resistance to said empire for decades. This is despite being one of the most terrorized countries in the world. Cubans elect their Municipal, Provincial, and National Assemblies and anyone (CP member or not) can run. The President (presently Castro) is then elected by the National Assembly. In addition, Cuban citizens can propose laws despite the relative poverty of the island, they have decent healthcare, education, nutritional needs met, etc. Plus, the WWF singled out Cuba as a uniquely ecologically sustainable country.

Right, so are there actually reasonable human rights there? What do HRW and AI say about Cuba? Castro is a dictator who kills and tortures his opponents just like Pinochet did. However as a leftist he is supported by contemporary lefties. Look at what HRW say about Cuba.