Stop the clear cutting of Woodlark Island for biofuel 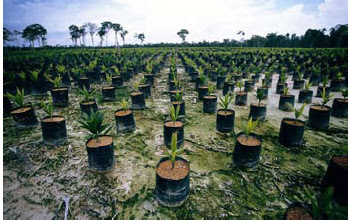 I am very pleased to have found the Rainforest Portal, there is more obviously to campaigning than sending letters, but the portal flags up all the current threats to rainforests and allows you to take action.

TAKE ACTION: The PNG government continues to approve rainforest destruction and diminishment even as they vocally seek to be paid with carbon market funds for their "protection". The oil palm biofuel industry -- the scourge of Asia and the world's rainforests -- is continuing to expand into Papua New Guinea (PNG). Malaysian company Vitroplant has been granted necessary permits by the PNG government to begin clearing 70% of the rainforests on biodiversity rich Woodlark Island, some 60,000 hectares, in order to establish a massive plantation of oil palm trees.

Expansion of oil palm plantations at the expense of primary rainforests runs contrary to PNG's government public support for preserving rainforests for climate and other benefits. An oil palm plantation on Woodlark Island will endanger the island’s flora and fauna, cause environmental upheaval, and result in drastic cultural change. The islanders of Woodlark have worked hard to draw international attention to this issue, and have issued an appeal for the support of international NGOs and citizens to pressure the government to withdraw the project. TAKE ACTION

There is another excellent report here:


While obviously concerned about environmental damage, Dr. Damon is even more worried about how the palm plantations will affect the unique island culture. He describes the island as one in which humans and animals have lived together in synthesis for millennia. The Woodlark Islanders live off subsistence gardening, herding wild pigs, and occasional hunting. Dr. Damon states that while the islanders are also dependent on rice from abroad, "there remains on the island something of a unique example of a regional social and ecological system that supported human and other life for 2000 and more years." While the island appears wild, few places have been untouched by humans: "areas regularly cut for gardens—fields—were systematically marked by much higher stands of forest that were to be left uncut. There the [Woodlark Cuscus] slept during the day; and there they would be sought the few months of the year when they were valued for their meat and fat; pigs and fish, of course, were vastly preferred... People regularly burned small plots of that larger area to maintain small meadows. These meadows were places for wild pigs to hang out during droughts or floods, tend their young, and hide from humans when the latter sought them for food... Both the high forests and these meadows are associated with sago orchards, which also seem wild, but which are also part of a management strategy effected on this island. The sago was also cut and harvested so that roughly two meters of each tree cut would be left as food for the 'wild' pigs." These management practices of the island’s resources, which may seem unconventional, have left a healthy population of cuscus, wild pigs, humans, and the forests that contain so much other bio-diversity.
at December 30, 2007

you shud really find some place where peoples who check this out...can cite thier sources...if they want to use a picture. or better yet, make all the pictures 'free' by the courtesy of ur kind soul